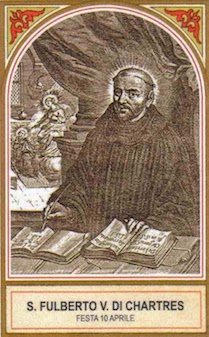 Born in Italy, of humble parentage, St. Fulbert went to school in Rheims, France, and conducted himself so brilliantly that when his mathematics and philosophy teacher, Gerbert, became Pope Sylvester II, he received a post at Rome. Later, he returned to France and was appointed chancellor of Chartres, overseeing the cathedral schools of the diocese in this capacity.

Fulbert labored diligently and long and succeeded in making these schools the greatest educational center in France, frequented by students from Germany, Italy, and England. He was regarded as another Socrates and Plato, a bulwark against the rationalizing temper of his day.

Later, Fulbert became Bishop of Chartres, despite his protestations of unworthiness. His influence was vast in this position, since he became the recognized oracle of the spiritual and temporal leaders of France in addition to maintaining control of the cathedral schools. Yet he never allowed external affairs to interfere with the task of caring for his diocese. He preached regularly at the cathedral and strove to spread instruction throughout his diocese.

This great Saint had a deep devotion to Mary and composed several hymns in her honor. He is also responsible for the beautiful Easter hymn, You Choirs of New Jerusalem. After an episcopate of nearly twenty-two years, St. Fulbert died on April 10, 1029.

PRAYER: God, Light and Shepherd of souls, You established St. Fulbert as Bishop in Your Church to feed flock by his word and form it by his example. Help us through his intercession to keep the Faith he thought by his word and follow the way he showed by his example. Amen.
Saint of the Day
The First Holy Martyrs of the Holy Roman Church
We Remember
June
Merciful Jesus, grant them eternal rest.
Mass Schedule:
7:30 AMMonday:
7:30 AMTuesday:
7:30 AMWednesday:
7:30 AMThursday:
7:30 AMFriday:
8:00 AMSaturday:
8:00 AMSunday:
8:00 AMHolidays:
Holy Hour - Adoration:
Thursday before First Friday: 7:00 - 8:00 PM