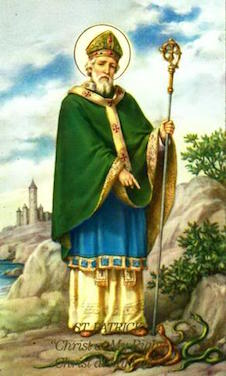 The date and place of St. Patrick’s birth are uncertain. He was born about the year 389, the son of Calpurnius, a Roman-British deacon, and Conchessa. When he was sixteen, he was carried as a captive into Ireland and obliged to serve a heathen master as a herdsman. Despite the harshness of the life there, he not only held on to his Faith but also learned the science of prayer and contemplation.

After six years the Saint effected a miraculous escape and returned home. In a dream, he was told to go back and Christianize Ireland. St. Patrick prepared for his task by studying in the monastery of Lerins from about 412 to 415 and was ordained at Auxerre by St. Amator about 417.

In 431, after a period during which his vocation to Ireland was tested by the hesitancy of his superiors in entrusting such a mission to him, St. Patrick was sent to assist Bishop Paladius in Ireland. On the death of the latter, St. Patrick was consecrated Bishop by St. Germanus (432) after receiving the approbation of Pope Celestine I. He traveled the length and breadth of Ireland, planting the Faith everywhere despite the hostility of the Druids, and succeeded in converting several members of the royal family.

On a visit to Rome in 442, the Saint was commissioned by Pope Leo the Great to organize the Church of Ireland and on his return made Armagh the primatial See and established Bishop in various places.

In winning a pagan nation for Christ, St. Patrick established many monasteries for men and women and made it famous for its seats of piety and learning. In the ensuing centuries Irish monks carried the Faith to England, France, and Switzerland.

After living a completely apostolic life of labor and prayer, St. Patrick died om March 17, 461, in the monastery of Saul, in Down in Ulster, leaving behind his Confessions which gives a vivid picture of great man of God.

PRAYER: God, You sent Patrick to preach Your glory to the Irish people. Through his merits and intercession grant that we who have the honor of bearing the name of Christian may constantly proclaim Your wonderful designs to others. Amen.
Saint of the Day
The First Holy Martyrs of the Holy Roman Church
We Remember
June
Merciful Jesus, grant them eternal rest.
Mass Schedule:
7:30 AMMonday:
7:30 AMTuesday:
7:30 AMWednesday:
7:30 AMThursday:
7:30 AMFriday:
8:00 AMSaturday:
8:00 AMSunday:
8:00 AMHolidays:
Holy Hour - Adoration:
Thursday before First Friday: 7:00 - 8:00 PM