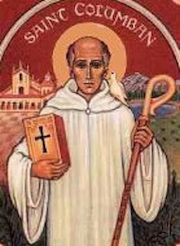 Born in the province of Leinster, Ireland, in 563, St. Columban has remained famous as a result of the numerous monasteries he established in Gaul, Switzerland, and Italy.

The monastic reform that he undertook with success can be seen in the rigors of his own penances and in his Rule, which was less balanced than that of St. Basil. After his death in 615, many of his Irish companions went on to become great founders in their own right and helped create a bulwark of faith against the onrush of paganism in the Dark Ages.

PRAYER: God, in St. Columban You joined the gift of proclaiming the Gospel with a love for the monastic life. Through his intercession and example, help us to seek You above all things and labor to increase the company of believers. Amen.
Saint of the Day
4. St. John Vianney
We Remember
August
Merciful Jesus, grant them eternal rest.
Mass Schedule:
7:30 AMMonday:
7:30 AMTuesday:
7:30 AMWednesday:
7:30 AMThursday:
7:30 AMFriday:
8:00 AMSaturday:
8:00 AMSunday:
8:00 AMHolidays:
Holy Hour - Adoration:
Thursday before First Friday: 7:00 - 8:00 PM