“Be strong, stand firm; be fearless, be dauntless and set to work, because Yahweh God, my God, is with you. He will not fail you or forsake you before you have finished all the work to be done for the House of Yahweh.” (I Chronicles 28: 20)

Sister Mary Celine Rachwal died at the age of 89 on October 3, 2020, at UPMC McKeesport Hospital from a heart attack. She, who had given her heart and life to God was lovingly welcomed home by the Divine Redeemer in the early afternoon.

Sister Mary Celine (Jenny Rachwal), the daughter of Anthony and Catherine Rachwal, was born In Niebocke, Poland on January 19, 1931, the youngest of four children. After her mother’s death, she and her brother and two sisters joined their father who had already emigrated to the United States and settled in Duquesne, PA.

Sister Celine entered the Sisters of the Divine Redeemer in 1950 and a year later was joined by her sister, Sister Mary Adrienne. Sister Celine made her First Profession on August 15, 1952. She earned her BSE from Duquesne University in Elementary Education and Business Education; obtained a MA in Administration and Secondary Education from Catholic University of America; and a Magistere in the French Language and Civilization from the University of Paris, the Sorbonne.

Sister enjoyed teaching, both elementary and high school students. Her love of France and the French language inspired many of her high school students and took many of them on trips to France. She also served as principal at Divine Redeemer Academy, in addition to teaching French and a few business courses. Sister served as assistant principal and taught French at Mon-Yough High School in McKeesport. For nine years, Sister was the head of the Foreign Language Department at Lake Catholic High School in Mentor, Ohio.

Sister was Superior at St. Anthony Convent. She served as Provincial Councilor, and when Sister Adrienne (her sister) became ill, Sister Celine took her place as our Community Treasurer. Even while struggling with many health issues, Sister gave her best to God and in service to our Community. She was a blessing to our Community in many ways.
Sister Celine was a very gifted Sister and used her gifts and talents in teaching, administration, and as treasurer. She oversaw the care and maintenance of the Motherhouse and grounds. She loved to garden, kept a watchful eye on the bird feeders, was an excellent seamstress, and made many lovely crochet items. Her way was a quiet, steadfast way relying on the guidance of the Holy Spirit and protection of St. Joseph. Aware of God’s presence, she turned her work into prayer. We shall miss her.
Surviving her are Mrs. Ruth Rachwal (sister-in-law); Mr/Mrs Gary & Diana Skalski (niece); Mr/Mrs Robert & Valerie Bolhouse (niece); Mr/Mrs Walter & Jenny Jominy (niece); Mr/Mrs Philip & Cyndi Roberge (niece); and grandnieces and grandnephews.
Pre-deceased are Mr/ Mrs. Donald & Helen Coll (sister); Mr. Matthew Rachwal (brother), and Sister M. Adrienne Rachwal, S.D.R. (sister).

“God gives and God takes away. Blessed be the name of the Lord!” (Book of Job) 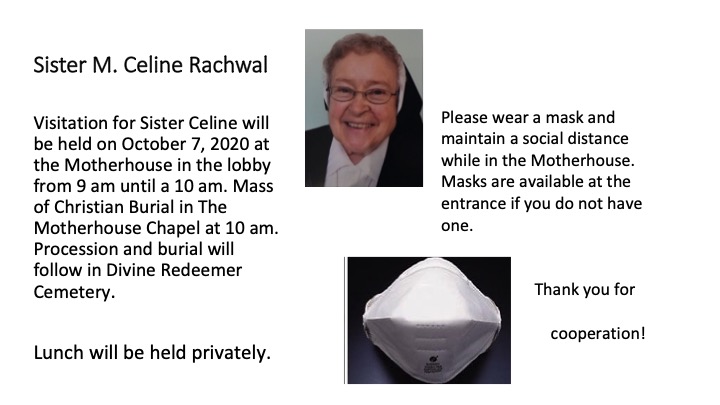