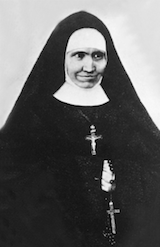 Elizabeth Eppinger
September 9, 1814 - July 31, 1867
Foundress of the Congregation
of the Sisters of the Divine Redeemer

The Bust of Mother Alphonse Marie

Current State of the Beatification Process

Elizabeth Eppinger, the eldest child of George Eppinger and Barbara Vogt Eppinger, was born on September 9, 1814 in the ancient resort town of Niederbronn in Lower Alsace. She was baptized the following day, receiving the name Elizabeth. Her ancestors were among those villagers who, contrary to others during the Reformation, had remained true to their faith.
Her parents were pious and God-fearing country folk, who made their way through 1ife with honesty and uprightness, and endeavored to give their eleven chi1dren a good Christian education. Their heavy and exhausting labors did not prevent them from daily praying the rosary together. 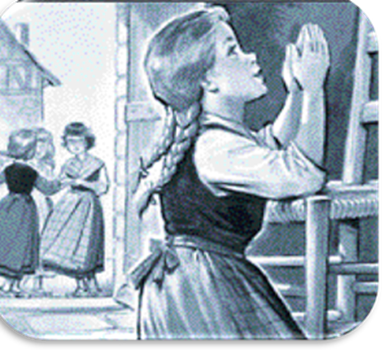 In her there were early indications of a soul gifted with grace. She was hardly three years old when she insisted that she be allowed to say the "Our Father" and the "Hail Mary" alone. Nor did these words ever cease to sound from her lips.

Her family noticed that the little girl retreated again and again to an empty room in order to pray there alone in solitude. They were even more astonished to hear her speak of God and of heavenly things in a way unheard of in children of her age. The more she recognized the essence of God, the more aware she became of the essence of sin as disobedience and ingratitude, as injustice and offense, as malice and downright meanness toward God. With even greater resoluteness and conscientiousness, then, Elizabeth sought to overcome sin in all its forms, particularly her predominant fault, and those faults to which she was especially inclined. Devotion to the bitter sufferings and death of the Savior strengthened her in this struggle and led her freely to assume works of penance and expiation.

The child Elizabeth was of a delicate nature and serious disposition. By temperament, she was stubborn and self-willed. 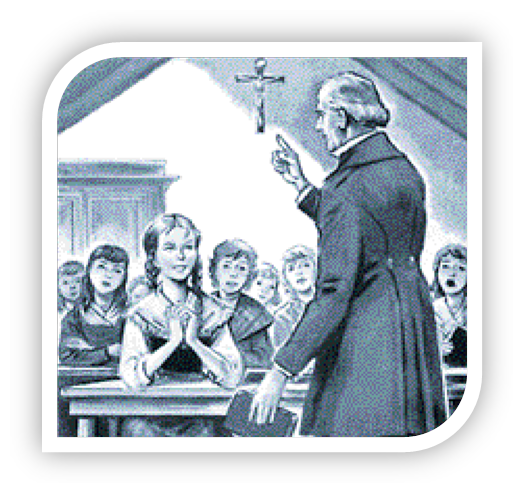 At the prescribed age, Elizabeth attended the village school, where she 1istened with great attention to the teachings of religion and to instruction in the catechism. She did not want to miss a single class. The Reverend John David Reichard, pastor of the parish imparted these instructions. A saintly man and a good judge of human character, he was the very person who before long was convinced that this pupil of his was an uncommonly gifted child. It was he, too, who very early recognized the mystical endowments of Elizabeth Eppinger and attested to this fact. 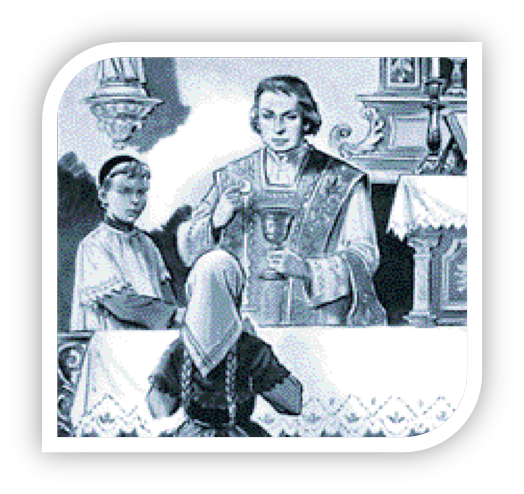 At fourteen, Elizabeth received her first Holy Communion. This was a great event in her life and she had prepared for it for a long time. Acceding to her request. The pastor allowed her to receive Holy Communion every week. Specifically through this, her union with God was preserved and strengthened - so that by the age of fifteen - she felt herself complete1y drawn to God. Her only desire was to be allowed to enter the convent soon. 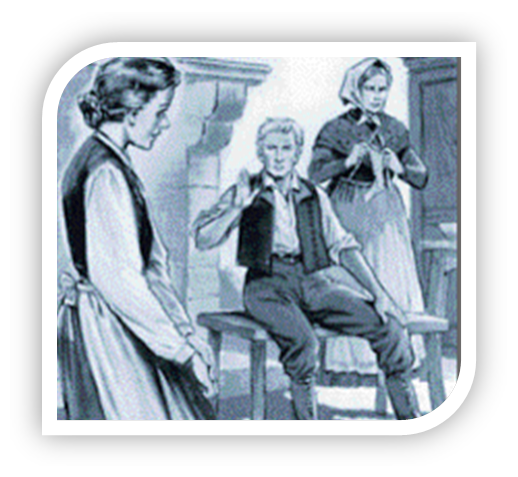 She requested permission to enter the convent, but her request was denied. Difficult times now broke upon her. She suffered from self-reproach, believed that she was unworthy for religious life and that she had acted merely out of self-love. Consolations that had been her portion until now were withdrawn. Instead she experienced spiritua1 dryness and "the sense" of being abandoned by God. In addition she suffered physical pains occasioned by the great amount of work that she had to do in the house and in the fields. All this led eventually to a nervous breakdown. 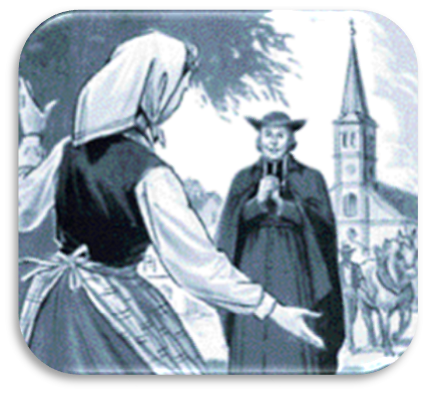 However even in this time of crisis, similar to what is found in the lives of some saints Elizabeth did not lose her longing for God. In Father Reichard she had wise and strong guidance directed toward a goal.
It became increasingly clear to her, then, that these trials were permitted by God in order that she become completely detached from earthly bonds and from her own self, so that at the appointed time, she might give herself over unreservedly to the wishes and the designs of God. 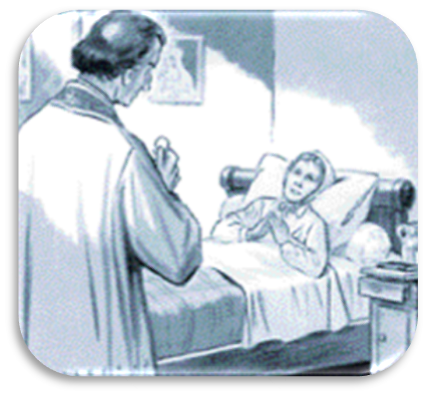 For several years she again enjoyed the blessings of good health. But it was not for long; once more heavy and grievous trials were her lot. A serious i1lness confined her to her bed for a long time. However, the way in which she bore this new suffering, the manner in which she prayed and in which she immersed herself in the “mysterium crucis”, in the mystery of the cross, was a source of edification to all who visited her. The attention of many strangers who had come to spend some time in the little resort town was drawn to the pious and saintly patient of whom they had heard. Many wanted to get to know her personally. Although such visits were tiring and exhausting to her, Elizabeth received the visitors with patience and love. She had a word of kindness and counsel for all of them. For young girls of her own age and for her friends from the parish, she was a counselor and a director. 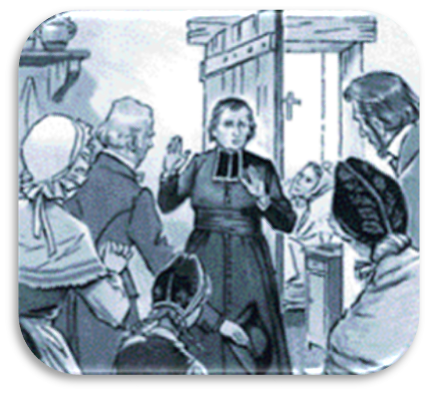 It was during this time that her mystical endowments became apparent in a conspicuous manner, particularly through her remarkable perceptiveness. This enabled her to scrutinize human hearts, to reveal things hidden and to foretell future events. The gift of "discernment of spirits" was undoubtedly hers at certain times.
There were occasions, when in all seriousness and with a holy sadness, she would look into the face of visitors whom she had never seen before, and of whom she had never heard, and tell them that they were no longer true to their holy faith, that they had left the path of truth and justice and virtue and had fallen into sin. She wanted them to acknowledge this before their conscience and before God, the eternal Judge. The person should repent and return to the Father (Luke 15:18). These words of the "seer" (already then Elizabeth Eppinger was known as such) fell on the ears of the listener like words from another world. 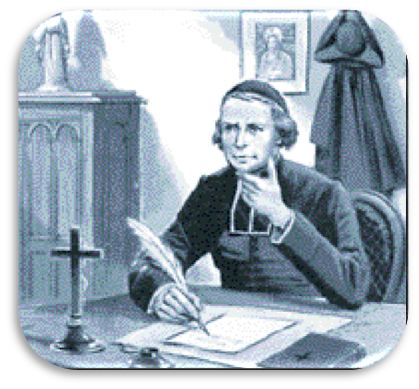 Nor did her words lack efficacy. Father Reichard is a witness of this when he says: "I experienced conversions which were far more miraculous than the raising of the dead. As Father Confessor of the Foundress, I can speak of a miracle of the mercy of God and I am very grateful for this."
And Professor Dietrich from the Strasburg seminary, who had been commissioned by Bishop Dr. Andreas Räss of Strassburg to investigate the "Niederbronn happenings," stated with deep conviction on his leaving: "It is not with a human being but with an angel that I have spoken.

The Will of God 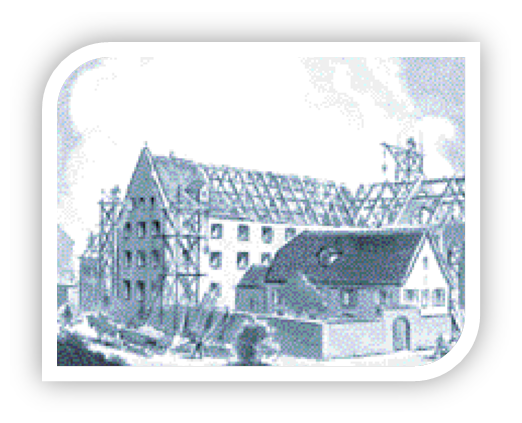 Despite her serious illness, Elizabeth Eppinger had not given up her thoughts of a religious life, a life consecrated to God. As soon as she felt somewhat better, she asked to be received into the Congregation of the School Sisters of Divine Providence at Rappoltsweiler in Upper Alsace.
The Bishop of Strassburg, however, did not approve of this plan and denied his assent. He knew Elizabeth Eppinger personally, knew of the wholesome and beneficial influence she exercised over a large section of the population, and he wanted to insure the continuance of this influence for the general public. As it was, the bishop was already entertaining thoughts of founding a congregation that would respond to the needs of the times and have as its main objectives the care of the sick, of the elderly, and of children. Certainly, it was an inspiration of God that was given him, that Elizabeth Eppinger might be placed as superior at the head of the young community, especially, since for years now, a number of like-minded girls had gathered around Elizabeth, allowing themselves to be guided and directed by her instructions. Then, said the bishop to him, the village pastor, Father Reichard, might take over the spiritual direction of the group. Elizabeth herself had never had the slightest thought about founding a new religious community. It was only following interior enlightenment that, she recognized the will of God in the wishes of the Bishop, and came to a decision; Father Reichard was relieved of the care of the parish in order to be able to give himself with undivided strength to the new work.

Founding of the Congregation 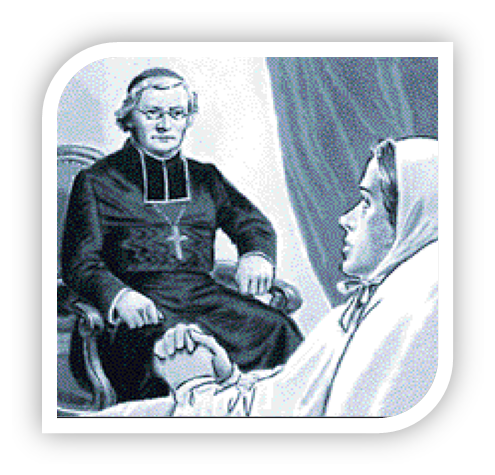 With Elizabeth, Father Reichard, reflected upon all the details of the new foundation. He worked out the Constitutions, presented them to the bishop, and petitioned for their approbation. The Bishop gave his official sanction and his permission to begin the foundation in the summer of 1849. A convent 1ike house had already been acquired in Niederbronn, and a modest little Chapel had been erected in it. It was occupied on August 28, 1849.
The solemn investiture of the Foundress ensued on September 10th, 1849. She received the name Alphonse Marie. Two weeks later, on September 25, nine postulants from Alsace received the religious habit. On January 2, 1850, the Superior solemnly professed her vows. By the end of 1850, the community already numbered more than 60 members. The Foundress and first Superior General always bore in mind this goal:
"The foundation and formation of a family whose spirit is the spirit of Jesus Christ, and who radiates this spirit in prayer, sacrifice and a service of love to the poor, to children, and to the sick."

The Spirit of Mother Alphonse Marie 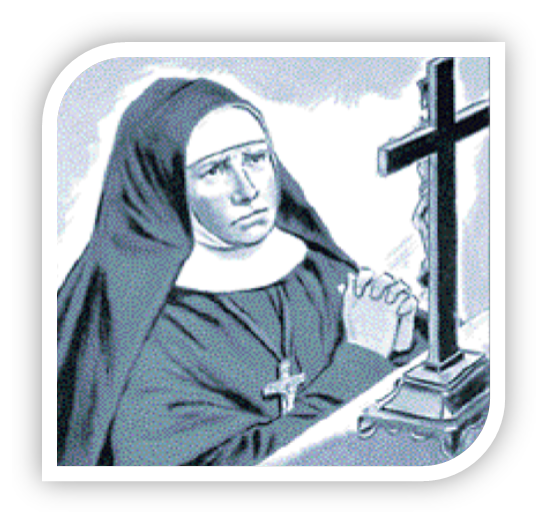 The road along which the Foundress as general superior had to walk resembled a way of the cross. Her indefatigable labors met again and again with afflictions and sufferings of soul and body.
Countless visitors came to her for counsel and help.
Then, one thinks of the total administration of the order, of the financial cares, of all the correspondence, of the hours of instruction that she gave the sisters, of the spiritual exercises or retreats to which the sisters were called together, of the long journeys to new stations that she undertook, some, at a considerable distance, nor may we forget the malicious attacks against the Foundress personally and against her work. To say nothing of the disappointments she suffered when the foundations in Vienna, Sopron (Hungary) and Wurzburg irrevocably severed themselves from the Motherhouse. All these trials preyed upon and consumed the physical strength of the Foundress, but imparted the ultimate radiance to her soul. 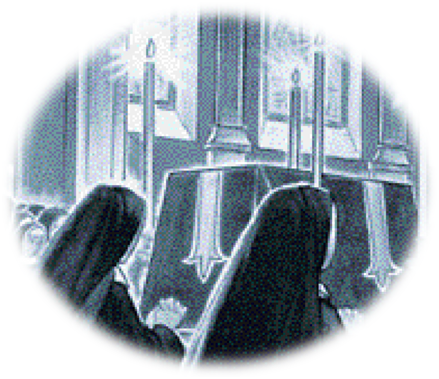