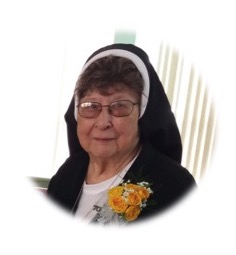 “Anyone who welcomes a little child in my name, welcomes me.”
(Matthew 18: 5)

In the early afternoon on October 14, 2022, Sister Mary Ann (formerly Sister Aloysius) was welcomed home by her Divine Redeemer. She was not alone. Two of our nursing Sisters were with her when she died, although Sisters and others were with her during the last two days.

Sister Mary Ann, the daughter of George and Mary Dujanovic, was born on October 23, 1930 in Barberton, Ohio. She was baptized at Holy Trinity Parish and early on, she was nurtured in her Faith by her parents. She grew up with 2 brothers and 3 sisters.

Sister Mary Ann entered the Sisters of the Divine Redeemer February 15, 1948 and made First Profession on August 15, 1950. She celebrated her 70th Jubilee on August 15, 2020. Sister attended Duquesne University and received her BA and MA in Education. Sister taught (or was principal) for a total of 68 years mostly in the Pittsburgh Diocese…more recently, in tutoring and homeschooling. Sister also taught in parish religious education (CCD) programs. Her special love was the little ones in the primary grades.

Some of her early years were spent at St. Michael’s School in Elizabeth; St. Stephen’s in McKeesport; and St. Paulinus in Clairton; and a total of 30 years at St. Bartholomew School in Penn Hills. While Sister was teaching at St. Bartholomew School, she received the Golden Apple Award in 1998, presented to excellent teachers. Sister also taught at Holy Trinity School in Barberton, Ohio.

Sister’s “retirement” was anything but that. She worked at the front reception desk; continued to tutor; was our “sunshine person” for birthdays, namedays, and for those who were sick. Sister Mary Ann supported many with her compassion and prayers. Sister had great devotion to the Sacred Heart of Jesus.

Sister is survived by Barbara Dujanovic and Ann Dujanovic (sisters-in-law); many nephews and nieces; and dear friends.