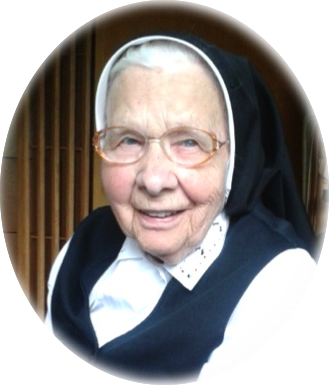 “May she rejoice in the company of the saints and with them praise God forever.”
(Order of Christian Funeral)

These words of the psalmist describe Sister M. Assumpta Krotky’s life and love. Sister wanted to “go home” to meet her Divine Redeemer. He came for her on November 11, 2017 at 11:20 a.m. while the Sisters were praying with and for her.

Sister M. Assumpta (Mary Krotky) was born on November 26, 1919 to Clement and Cecilia Cvengros Krotky in Markusovce, Slovakia. She was the eldest of three and had two brothers, Joseph and Vincent. Clement had gone to America to find work and to be able to send money home to his family. After the death of their mother, Sister and her two brothers came to Cleveland, Ohio on July 4, 1937 and Sister became an American citizen on September 25, 1939.

As a young lady, Mary Krotky was acquainted with our Sisters in Slovakia and wanted to enter the Community but was advised by one of the Sisters to come to America and enter here. She entered the Sisters of the Divine Redeemer on September, 1941, and on August 16, 1942 received the name, Sister Mary Assumpta. Sister made her First Profession on August 15, 1944, and pronounced her Final Vows on August 15, 1949.

Sister earned a BS in Elementary Education while attending Villanova College in Philadelphia and St. John’s College in Cleveland, Ohio. Sister Assumpta loved to teach and was an excellent and creative teacher who enjoyed working with children in various parishes in Ohio, Pennsylvania, and Buffalo. She also worked at Little Flower Institute, an orphanage in Darby, PA.

Her prayerfulness, her kindness and love of the Sisters made her a good local Superior which position she held in several convents. Sister served as a Council Member in the American Province for twelve years and as General Councilor in Rome for six years. Later, Sister Assumpta extended her loving care to the Sisters in the infirmary and helping wherever she saw a need. Her kindness, willingness to help, together with her spirit of joy, have been special gifts to the Community.

Nature, sunshine, flowers were some of her special loves. Even after Sister was wheelchair bound, being wheeled outside into God’s sunshine remained a special gift for her. 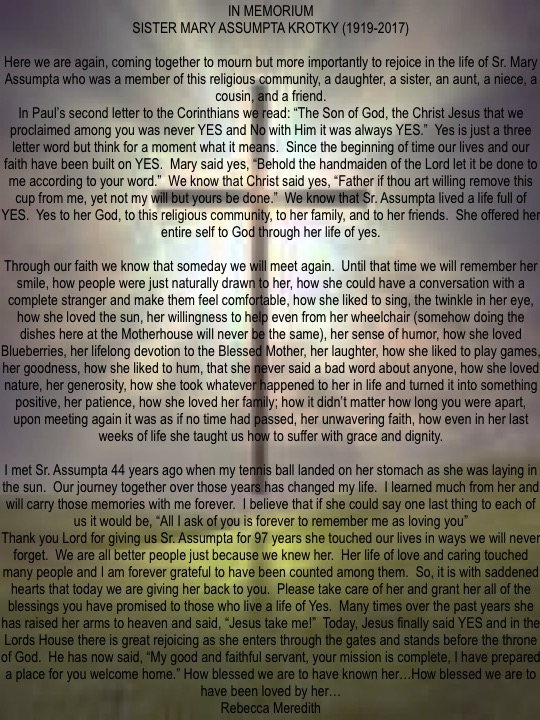