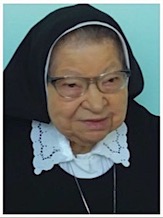 For my soul has been freed from death,
my eyes from tears, my feet from stumbling.
I shall walk before the Lord in the land of the Living!”
(Psalm 116)

On All Saints Day, November 1, 2020, when the Church remembers those who earned the heavenly crown of glory, our Sister Celestine met her Lord and entered eternity. Death came at 2:05 p.m. in the afternoon while Sr. Alojziana, our Superior, and two of our nurses kept vigil at her side in the Motherhouse Infirmary.

Sr. Celestine, 95 years old, had just celebrated her 75th Anniversary as a Sister of the Divine Redeemer in August. Because of the pandemic restrictions (Covid-19) Sister’s family and many friends were not able to join her. The Community of Sisters, however, prepared a very special celebration for her, including a special Holy Mass, festive meal, gifts, and sharing “old” photos and memories.

Sister Celestine (Irene Bacsi) was born in Lorain, Ohio, on July 19, 1925 to Stephen J. and Rosalia (Mojzes) Bacsi; she had three brothers.
Sister entered the Sisters of the Divine Redeemer in 1943 and made her First Profession on August 15, 1945. She earned a BS in Education and Library Science. She taught primary grades and kindergarten in the dioceses of Cleveland and Pittsburgh, including 20 years at her home parish, St. Ladislaus (Lorain, Ohio), where she also served as principal.
When the school closed, Sister remained in the parish serving as moderator of the Senior Center there. After this, she joined the staff of Villa St. Teresa, our assisted-living residence in Darby, Pennsylvania (near Philadelphia), where she was director of the Arts & Crafts Center for 16 years. It was there that the residents created beautiful handcrafts that both they and others would enjoy.

In January 2006, Sr. Celestine came home to the Motherhouse in Elizabeth, Pennsylvania, where she helped in the community there and offered prayer support for the needs of the Church and of the world.

However, her caring heart reached far beyond 999 Rock Run Road. She prayed for priests, bishops, cardinals, and Pope Francis, also finding other ways of supporting them. Among her favorites were the Capuchin Franciscans working in New Guinea and the American Indians. She worked diligently making handmade items to sell, using the profits for one of her charitable causes.

Sister Celestine also found time to keep in touch with family and her many friends—particularly those in her hometown, Lorain, Ohio. For many years she would return there, around her Birthday, for an annual reunion with family, friends, and former students at a popular restaurant.

In recent years, Sister would remember shut-ins each month sending them articles of Faith and Inspiration which she cut out of the previous month’s missalettes. With all her charitable activities Sister Celestine still surprised the Sisters at times by making some of their favorite Hungarian recipes.

Sister Celestine…We believe that the care you had for others while on earth continues even now as you intercede for us before the Lord in Heaven. Thank you! 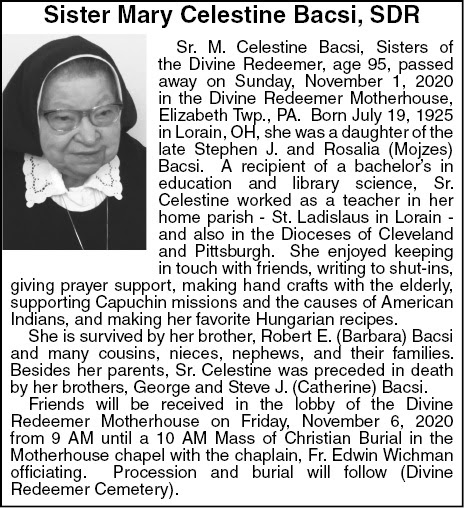