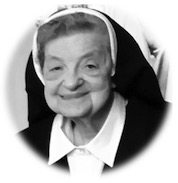 On January 3, 2021, The Feast of the Three Kings and between the most sacred moments of Consecration and Communion, the Redeemer came for Sister Rosemary as she prayed in her wheelchair from the choir of the Motherhouse chapel. The gift of her life was received in the welcoming arms of her Lord.

Sister Rosemary (Rose Mary Horvath), the daughter of Frank and Mary Horvath, was born in Cleveland, Ohio on April 19, 1938.

After completing her high school, Sr. Rosemary took business classes at Cuyahoga Community College. She entered the Sisters of the Divine Redeemer only to leave them for a while because of serious eye problems. She re-entered in 1968 and made her Profession of Vows one year and a half later. The Lord had some special plans for her.

Like our Foundress, Blessed Alphonse Marie Eppinger, Sister had a special place in her heart for the poor, the sick, and the elderly. This was evidenced in her work in the business office at Divine Redeemer Memorial Hospital in Minnesota; when she was the Administrator at Little Flower Manor Nursing Home in Darby, PA; and when she was the Parish Social Minister at St. Bartholomew Parish in Penn Hills and at St. Anthony Parish in Monongahela. In 2006, she became Provincial Superior and later Regional Superior, and was sensitive not only to the needs of the Sisters but also to the needs of others. She had a gift of involving lay people to help with various projects such as establishing Days of Reflection and an annual flea market; both were a great success. Offering hospitality was also one of her gifts.

As Sister Rosemary’s health and eye sight began to fail, she organized volunteers to help at the reception desk at the Motherhouse and continued to help in other ways. Phone calls were her special way of connecting with people until her hearing failed. A large screen computer enabled her to continue keeping in touch even with her limited eye sight. Quietly, without complaint, she lived with her losses and offered her prayers and pain for her Sisters and for those in need.
See also

Sister is survived by her two nieces: Deborah Vasko and Sandra Vasko.

Visitation for Sister Rosemary will be held on January 7, 2021 at the Motherhouse in the lobby from 9 am until a 10 am. Mass of Christian Burial in the Motherhouse Chapel at 10 a.m. Procession and burial will follow in Divine Redeemer Cemetery.

May she rest in peace!