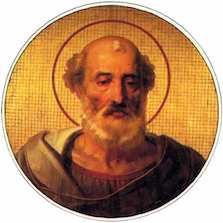 St. Julius, a Roman, was elected Pope in 337, succeeding St. Mark, whose reign had been exceedingly brief (less than nine months). The Church was then in a troubled condition on account of the Arian agitators whose heresy had been condemned at Nicaea, but who were beginning to deceive Constantine the Emperor in regard to their real character. When the Emperor died, his sons, Constantine, Constantius, and Constans, divided the Empire.

For a considerable time St. Athanasius, Bishop of Alexandria, had been an object of persecution to the Arians. Upon the accession of Pope Julius, their Bishop in the East sent three deputies to accuse St. Athanasius. At an impartial hearing the Bishop of Alexandria was acquitted of every accusation that ha been brought against him. On the demand of the Arians, the Pope assembled a council at Rome in 341, which confirmed St. Athanasius in his See in spite of the fact that the Arian Bishops refused to attend.

As the Arians still remained obstinate, Pope Julius convinced the Emperors Constans and Constantius to convoke a Council at Sardica in Illiricum. It began in May, 347, and confirmed the decrees of Nicaea, of which it is regarded as an appendix or continuation. It declared St. Athanasius orthodox, and deposed certain Arian Bishops. In this Council it was decreed that any Bishop deposed by a synod in his province has a right to appeal to the Bishop of Rome.

In a letter to the Oriental Bishops of the Arian party, St. Julius appeals to the apostolic traditions in defense of the right of the Holy See to be consulted, a right that the Eastern Bishops admitted, but they had slighted by their conduct. St. Julius died April 12, 352.

PRAYER: God, Light and Shepherd of souls, you established St. Julius as Pope over Your Church to feed Your flock by his word and form it by his example. Help us through his intercession to keep the Faith he thought by his word and follow the way he showed by his example. Amen.
Saint of the Day
The First Holy Martyrs of the Holy Roman Church
We Remember
June
Merciful Jesus, grant them eternal rest.
Mass Schedule:
7:30 AMMonday:
7:30 AMTuesday:
7:30 AMWednesday:
7:30 AMThursday:
7:30 AMFriday:
8:00 AMSaturday:
8:00 AMSunday:
8:00 AMHolidays:
Holy Hour - Adoration:
Thursday before First Friday: 7:00 - 8:00 PM