St. Martin I, Pope and Martyr 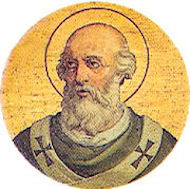 A member of Roman clergy, St. Martin was sent to Constantinople. Upon the death of Pope Theodore he was elected to succeed him, in the year 649. In the following October he held a Council in the Lateran Church in which he condemned the leaders of the heresy of the Monothelites, a modification of that of the Eutychians. A document emanating from the Emperor Constans was also censured.

This incensed the Emperor, and he sent Olympus, his chamberlain, to Italy with orders to cause the Pope to be put to death, or to send him to the East as a prisoner. An attempt on the Saint’s life in the Church of St. Mary Major was miraculously frustrated. Olympus now bcame reconciled to the Pope and went over to Sicily.

The Emperor then sent Calliopas and Pellurus to Rome, with orders to seize St. Martin. The Pope, who lay sick, was seized, carried down the Tiber at midnight, and conveyed to the East. After three months he arrived at the island of Naxos, where his guards kept him a whole year and subjected him to many indignities.

In 654, Martin reached Constantinople, and for three months he was confined in a dungeon. His suffering were extreme, but like St. Stephen, he hoped that his persecutors would be brought to repentance. He was banished to Chersonesus in 655, while a terrible famine raged in that region. In his exile, Martin’s sorrow was the greater because he regarded the Church as having abandoned him by electing a new Pope. Nonetheless, he prayed constantly for his successor, Eugene I. Martin died in 656, and is the last Pope to be venerated as a Martyr.

PRAYER: Almighty God, help us to bear worldly adversities with an unconquerable spirit. For You did not let St. Martin Your Pope and Martyr be terrified by threats or conquered by pains. Amen.
Saint of the Day
The Conversion of St. Paul, Apostle
We Remember
January
Merciful Jesus, grant them eternal rest.
Mass Schedule:
7:30 AMMonday:
7:30 AMTuesday:
7:30 AMWednesday:
7:30 AMThursday:
7:30 AMFriday:
8:00 AMSaturday:
8:00 AMSunday:
8:00 AMHolidays:
Holy Hour - Adoration:
Thursday before First Friday: 7:00 - 8:00 PM