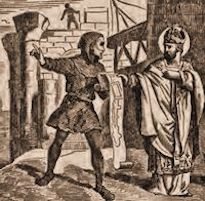 St. Paternus was born at Poitiers about the year 482. His father ended his days in solitude in Ireland. St. Paternus emulated his example and embraced monastic life in the diocese of Poitiers.

Later, the Saint went to Wales, where he built a monastery called Llan-patern-vaur. After visiting his father in Ireland, he returned to his monastery at Poitiers, or rather Ansion, in that diocese; but soon after, with a monk of that house, he embraced a hermit’s life in the forest of Seicy. Here he converted a number of idolaters to the Faith and extended his apostolic labors as far as Bayeux, with several priest as his fellow laborers.

At an advanced age St. Paternus was consecrated Bishop of Avranches by Germanus of Rouen. He governed his diocese thirteen years and died about the year 565.

PRAYER: God, You made St. Paternus an outstanding exemplar of Divine love and the Faith that conquers the world, and added him to the roll of saintly pastors. Grant by his intercession that we may persevere in Faith and love and become sharers of his glory. Amen.
Saint of the Day
The Conversion of St. Paul, Apostle
We Remember
January
Merciful Jesus, grant them eternal rest.
Mass Schedule:
7:30 AMMonday:
7:30 AMTuesday:
7:30 AMWednesday:
7:30 AMThursday:
7:30 AMFriday:
8:00 AMSaturday:
8:00 AMSunday:
8:00 AMHolidays:
Holy Hour - Adoration:
Thursday before First Friday: 7:00 - 8:00 PM