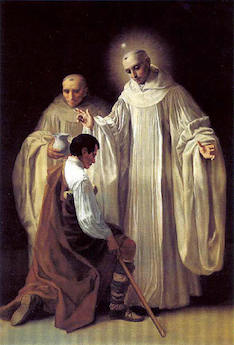 Born of noble parents in France about 1024, Robert became a Benedictine at Moutier-la-Celle when he was fifteen. Such was the religious dedication of the young man that when he had completed his novitiate, he was named Prior. Later, he was made Abbot of St. Michael of Tonnere.

Yet something was missing in Robert’s life. He was desperately trying, but not succeeding, in promoting the observance of a stricter interpretation of the Benedictine Rule. Finally, about 1075, he established a monastery at Molesmes in Burgundy, but here too he did not succeed in his great quest—at least not initially.

In 1098, impelled by the love of God, and his great faith in the Rule of St. Benedict. Robert took St. Alberic, St. Stephen Harding, and others of his monks and traveled to the forest of Citeaux where he started over again. This time, he was successful—in eighteen months he was able to leave the rule of the monastery in the hands of Alberic and Stephen. This was the beginning of the Cistercian movement, and its greatest representative, St. Bernard, was in the near future to come to Citeaux and make it the center of the Christian world of that time.

Robert was then able to return to Molesmes and be successful there too with his reform. This great lover of God and founder of a dedicated Order died on March 21, 1111, and was canonized in 1222.

PRAYER: Lord, amid the things of this world, let us be wholeheartedly committed to heavenly things in imitation of the example of evangelical perfection You have given us in St. Robert the Abbot. Amen.
Saint of the Day
The Conversion of St. Paul, Apostle
We Remember
January
Merciful Jesus, grant them eternal rest.
Mass Schedule:
7:30 AMMonday:
7:30 AMTuesday:
7:30 AMWednesday:
7:30 AMThursday:
7:30 AMFriday:
8:00 AMSaturday:
8:00 AMSunday:
8:00 AMHolidays:
Holy Hour - Adoration:
Thursday before First Friday: 7:00 - 8:00 PM