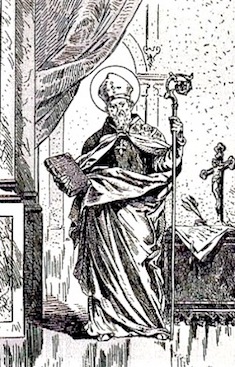 Born in 1100 to the renowned Della Scala family of Milan, Galdinus became a priest and served as chancellor and archdeacon under two Archbishops of Milan. He diligently carried out his duties and gained the confidence of the people.

At the election of Pope Alexander III in 1159, a few disgruntled Cardinals sought to establish a rival Pope who was more favorable to the Emperor Frederick Barbarossa and his schemes to extend his power. However, the people chose to accept Alexander as their Pontiff and so aroused the ire of Barbarossa. Galdinus and Archhbishop Hubert were forced to seek exile outside the city for a time.

In 1165, Galdinus was made a Cardinal and –the next year upon the death of Archbishop Hubert—Archbishop of Milan. In this position, Galdinus assisted in rebuilding Molan in the wake of Barbarossa’s occupation, which had begun in 1160.

The Saint preached continuously and aided and comforted the poor. He restored discipline among the clergy, directed his wisdom against the schism, and strove to overcome the teaching of the Cathari, who were making inroads into Lombardi.

In 1176, St. Galdinus died in the pulpit after delivering a passionate sermon against false teachings. That same year, the Lombard league overwhelmed the imperial army at the Battle of Legnano.

In the wake of this defeat, in 1177 Barbarossa went humbly to meet the Pope in Venice, abjured his schism, and made his peace with the Church.

PRAYER: God, You made Your Bishop St. Galdinus an outstanding minister of Your Church by his prayer and pastoral zeal. Through his prayers grant that Your faithful flock may always find pastors after Your heart and salutary pastures. Amen.
Saint of the Day
The Conversion of St. Paul, Apostle
We Remember
January
Merciful Jesus, grant them eternal rest.
Mass Schedule:
7:30 AMMonday:
7:30 AMTuesday:
7:30 AMWednesday:
7:30 AMThursday:
7:30 AMFriday:
8:00 AMSaturday:
8:00 AMSunday:
8:00 AMHolidays:
Holy Hour - Adoration:
Thursday before First Friday: 7:00 - 8:00 PM