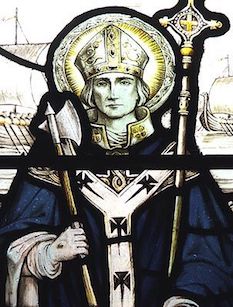 St. Elphege, born of noble and virtuous parents, abandoned the world at an early age and entered the monastery of Derherste in Gloucestershire. After some years he began to lead the life of a recluse in a cell in the neighborhood of the Abbey of Bath, of which he was appointed Abbot until 984, when, through the instrumentality of Dt. Dunstan, he was elected Bishop of Winchester. In 1006, he was appointed Archbishop of Canterbury.

This period in English history was greatly disturbed by the incursions of the Danes, who sacked and pillaged the country that was then governed by the weak King Ethelred. The Archbishop hurried to the scenes of blood and endeavored to turn the cruelty of the pagans from his people to himself.

Consequently, his cathedral was burned, he was made to endure great tortures, and for several months he was kept in prison. Refusing to use the goods of his Church for his ransom, he was put to death while he prayed for his enemies. His martyrdom occurred April 19, 1012.

PRAYER: God, You gave splendor to Your Church by granting St. Elphege the victory of martyrdom. Grant that, as he imitated the Lord’s Passion, so we may follow in his footsteps and attain everlasting joys. Amen.
Saint of the Day
The First Holy Martyrs of the Holy Roman Church
We Remember
June
Merciful Jesus, grant them eternal rest.
Mass Schedule:
7:30 AMMonday:
7:30 AMTuesday:
7:30 AMWednesday:
7:30 AMThursday:
7:30 AMFriday:
8:00 AMSaturday:
8:00 AMSunday:
8:00 AMHolidays:
Holy Hour - Adoration:
Thursday before First Friday: 7:00 - 8:00 PM