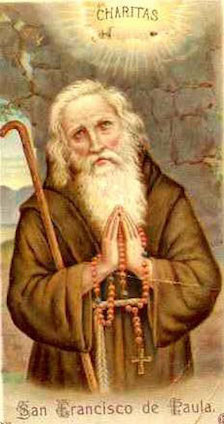 St. Francis was born about the year 1416, at Paola, a small city Calabria. His parents were very poor, but virtuous. He learned to read in the Franciscan convent at St. Mark’s, a town in the same province. After spending a year with the Franciscans, he took up his abode in solitude about half a mile from Paola in 1432.

Before the Saint was twenty, two others joined him to share in his devout exercises. The neighbors built them three cells and a chapel, in which a priest from the parish church said Mass for them. This is looked upon as the beginning of the Order of Minims, the foundation of which is placed in 1436.

The Order was confirmed by a bull of Sixtus IV in 1474, with St. Francis as Superior General. The first monastery had been built in 1454 and was followed by several others. In 1482, he went to France by command of Sixtus IV, at the request of Louis XI, whose entire conversion he effected before the latter’s death in 1483. St. Francis now established his Order in France, and Charles VIII and Louis XII became its special benefactors.

When his long life of penance was drawing to a close, St. Francis spent the last three months in his cell to prepare for death and eternity. He fell sick on Palm Sunday, 1507, and died shortly thereafter at ninety-one years of age. He was canonized in 1519 by Pope Leo X.

PRAYER: God, the exultation of the humble, You raised St. Francis to the glory of Your Saints. Through his merits and example, grant that we may happily obtain the rewards promised to the humble. Amen.
Saint of the Day
8. Immaculate Conception of the Blessed Virgin Mary
We Remember
December
Merciful Jesus, grant them eternal rest.
Mass Schedule:
7:30 AMMonday:
7:30 AMTuesday:
7:30 AMWednesday:
7:30 AMThursday:
7:30 AMFriday:
8:00 AMSaturday:
8:00 AMSunday:
8:00 AMHolidays:
Holy Hour - Adoration:
Thursday before First Friday: 7:00 - 8:00 PM