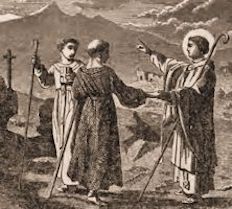 St. Marcellinus was born in Africa and became a priest. He journeyed to Gaul with Vincent and Domninus and preached the Gospel with great success in the vicinity of the Alps. Then he fixed his residence at Embrun, where he built an oratory, in which he spent his nights in prayer after consecrating the day to the works of the ministry.

The Saint’s example and discourses converted a great number of the idolaters among whom he lived. When the whole city had been converted to Christianity, St. Eusebius of Vercelli consecrated his oratory at his request.

St. Marcellinus himself received episcopal consecration, and worked with all his power for the spread of the Kingdom of God. He commissioned Vincent and Domninus to preach in several places that he could not visit in person. Heaven confirmed his apostolic labors with miracles. He died at Embrun in 374.

PRAYER: God, Light and Shepherd of souls, You established St. Marcellinus as Bishop in Your Church to feed your flock by his word and form it by his example. Help us through his intercession to keep the Faith he taught by his word and follow the way he showed by his example. Amen.
Saint of the Day
8. Immaculate Conception of the Blessed Virgin Mary
We Remember
December
Merciful Jesus, grant them eternal rest.
Mass Schedule:
7:30 AMMonday:
7:30 AMTuesday:
7:30 AMWednesday:
7:30 AMThursday:
7:30 AMFriday:
8:00 AMSaturday:
8:00 AMSunday:
8:00 AMHolidays:
Holy Hour - Adoration:
Thursday before First Friday: 7:00 - 8:00 PM