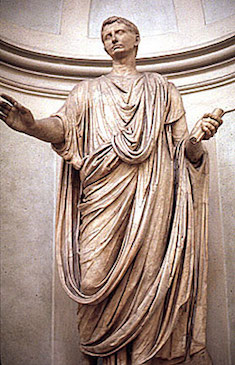 Marcus Aurelius was followed in 180 on the imperial throne by his son Commodus, a vicious prince. Yet toward the Christians he was not cruel, and the severity of the laws was relaxed. To the number of those influential persons who joined the ranks of Christians during the reign of Commodus, beginning in 180, belonged St. Apollonius, a man of importance and learning.

Severus, one of his slaves, accused Apollonius of being a Christian, and was put to death in virtue of an obscure law of Marcus Aurelius, who, though enforcing the punishment of convicted Christians, had decreed that their accusers should be put to death. After the execution of the slave, the judge sent an order to St. Apollonius to renounce his religion. St. Apollonius refused to submit, and was referred to the judgment of the Roman Senate.

The Saint then composed an apology for the Christian religion, which he pronounced before that illustrious body. This eloquent discourse was filled with sacred and profane learning and concluded with the words: “We have hastened to honor Jesus because we have learned lofty commandments from Him. . . . Yet if it were a delusion (as you assert) which tells us that the soul is immortal, and that there is a judgment after death and a reword of virtue at the resurrection, and that God is the Judge, we would gladly be carried away by such a lie as that, which has taught us to lead good lives awaiting the hope of the future even while suffering adversities.”

This magnificent discourse fell on deaf ears, and St. Apollonius was condemned by a decree of the Senate for refusing to abjure his Faith. He was beheaded in the sixth year of Commodus, about 186.

PRAYER: God of power and mercy, through Your help St. Apollonius has overcome the tortures of his passion. Help us who celebrate his triumph to remain victorious over the wiles of our enemies. Amen.
Saint of the Day
The Conversion of St. Paul, Apostle
We Remember
January
Merciful Jesus, grant them eternal rest.
Mass Schedule:
7:30 AMMonday:
7:30 AMTuesday:
7:30 AMWednesday:
7:30 AMThursday:
7:30 AMFriday:
8:00 AMSaturday:
8:00 AMSunday:
8:00 AMHolidays:
Holy Hour - Adoration:
Thursday before First Friday: 7:00 - 8:00 PM