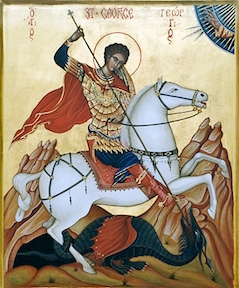 The devotion to this holy Martyr can be traced at least to the 5th century, and if can be proved that the oldest of the churches dedicated to his honor in Constantinople was built by Constantine the Great, then certainly to a much earlier date. Very little is known of him, as certain Acts forged by ancient heretics have cast no little obscurity over his life. It is supposed that he suffered martyrdom in the persecution under Diocletian at Nicomedia in the beginning of the 4th century.

Among the Greeks St. George is called “the Great Martyr”, and his feast is kept as a Holy Day of Obligation. His intercession was implored especially in battles, as he is said to have been a soldier. Under the first Norman kings he was chosen as Patron of England, and Edward III instituted an order of Knighthood in his honor.

There are some who suppose that it was St. George who tore down the imperial edicts of persecution when they were first published at Nicomedia. He is generally represented as engaged in combat with a dragon. He died about the year 303 and is one of the Fourteen Helpers invoked for emergencies or afflictions.