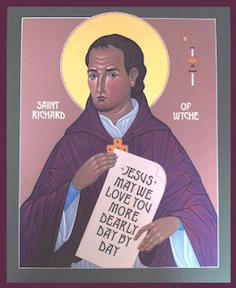 Born in 1197 at the manor of Wiche near Worcester, England, St. Richard, like so many other Saints, exhibited a great inclination to virtue from his childhood, spending his time in pious exercises or in study, while he showed himself averse to the ordinary amusements of his age. His greatest pleasure was to render service to others.

Richard went to Paris to continue his studies, and together with two chosen friends lived an austere life. On his return to England he took the degree of Master of Arts at Oxford and then went to Bologna, in Italy, to devote himself to the study of Canon Law. Finally, St. Edmund, Archbishop of Canterbury, summoned Richard to accompany him to France when he went there in exile. In France, Richard was ordained to the priesthood.

Elevated to the Episcopal See of Chichester, Richard overcame many obstacles. As soon as je enjoyed sufficient liberty of action, he applied himself with all possible zeal to the government of his church. His firmness in maintaining ecclesiastical discipline and his charity to the poor commanded great admiration. He suffered much fro two years at the hands of king Henry III.

The Pope commissioned Richard to preach a crusade against the Saracens. In fulfilling this mission he fell sick of fever, which was the forerunner of his death in 1235. He was canonized in 1262 by Pope Urban IV.

PRAYER: God, You made St. Richard an outstanding exemplar of Divine love and the Faith that conquers the world, and added him to the roll of saintly pastors. Grant by his intercession that we may persevere in Faith and love and become sharers of his glory. Amen.
Saint of the Day
8. Immaculate Conception of the Blessed Virgin Mary
We Remember
December
Merciful Jesus, grant them eternal rest.
Mass Schedule:
7:30 AMMonday:
7:30 AMTuesday:
7:30 AMWednesday:
7:30 AMThursday:
7:30 AMFriday:
8:00 AMSaturday:
8:00 AMSunday:
8:00 AMHolidays:
Holy Hour - Adoration:
Thursday before First Friday: 7:00 - 8:00 PM