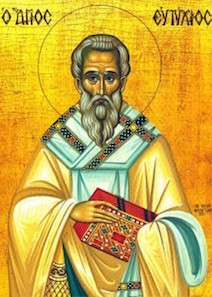 Born in Phrygia about 512, Euthychius became a monk at Amasea in Pontus after having been ordained a priest. While on a mission for his Bishop in Constantinople in 552, he was consecrated Bishop of Constantinople at the behest of Emperor Justinian I.

The Saint presided, along with the Patriarch of Alexandria and Antioch, at the Fifth Ecumenical Council in 553, which was unable to hold back the onrush of the Monophysite heresy. Some time later, Eutychius butted heads with the Emperor himself by resisting Justinian’s desire to be an arbiter in theological matters.

The Patriarch was exiled to an island in the Propontis in 565. He returned to Constantinople twelve years later upon the death of the Emperor. Somehow, he denied the immortality of the body and came into conflict with the future Pope St. Gregory the Great who was the representative of the Holy See in Constantinople at the time.

On his deathbed in 582, the holy Patriarch admitted his error.

PRAYER: God, You made ST. Eutychus an outstanding exemplar of Divine love and the Faith that conquers the world, and added him to the roll of saintly pastors. Grant by his intercession that we may persevere in Faith and love and become sharers in his glory. Amen.
Saint of the Day
8. Immaculate Conception of the Blessed Virgin Mary
We Remember
December
Merciful Jesus, grant them eternal rest.
Mass Schedule:
7:30 AMMonday:
7:30 AMTuesday:
7:30 AMWednesday:
7:30 AMThursday:
7:30 AMFriday:
8:00 AMSaturday:
8:00 AMSunday:
8:00 AMHolidays:
Holy Hour - Adoration:
Thursday before First Friday: 7:00 - 8:00 PM