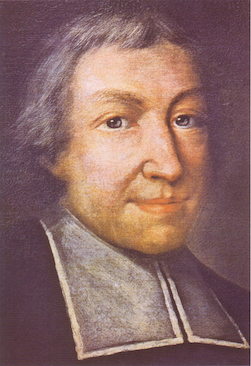 Founder of the Institute of the Brothers of the Christian Schools, St. John Baptist de la Salle is called the father of modern pedagogy. After completing his education he desired to enter the priesthood. He was ordained in 1678 and received his Doctorate in Theology in 1680.

Observing that the poor of his day were grossly neglected as far as their education was concerned, St. John became the first to set up training colleges for teachers who would instruct the poor. Thus became the Institute of the Brothers of the Christian Schools, whose first novitiate was founded at Vangirard in 1691. St. John exhorted its members to have a father’s love for their pupils, be ready to devote all their time and energies to them, and be as concerned to save them from wickedness as to dispel their ignorance.

In 1695, John drew the Rule for his Brothers (which he later revised in 1705) and also wrote The Conduct of Christian Schools, which set forth his pedagogical system and has become a classic in the field of education. He died On April 7, 1719, and was canonized on May 24, 1900, by Pope Leo XIII.