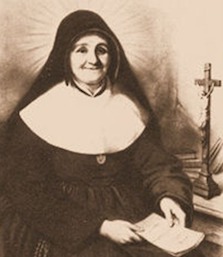 Born in 1751 at Cuvilly, France, St. Julia gave evidence from her earliest year of exceptional traits of intelligence and devotion. By the age of fourteen, she had already taken a vow of chastity and was working to support her family which become impoverished.

Suddenly, in 1773, the Saint’s whole life was changed. She witnessed the attempted assassination of her father and the shock left her largely paralyzed. Undaunted, St. Julia continued her deeply spiritual life, and strenuously fought against the Reign of Terror initiated by the Jacobins during the French Revolution, When calm was restored, this holy woman founded the Institute of the Sisters of Notre Dame in collaboration with Frances Blin, Viscountess of Gezaincourt, and Father Joseph Varin, of the “Fathers of the Faith” (a group standing in for the suppressed Society of Jesus). Her society had for is purpose the teaching and the salvation of the children of the poor.

In 1804, St. Julia was suddenly cured of her paralysis (which she had endured for twenty-two years) at the end of a mission given by Father Enfantin of the Fathers of the Faith. She was now able to consolidate and extend the new Institute as well as to give her personal assistance to the mission conducted by the Fathers.

After Father Varin’s departure from Amiens, St. Julia had to struggle hard to preserve the distinctively modern character of her Institute. Her success can be seen in the modern cast of the Institute, which has spread throughout the world. After having spent herself in the service of God, St. Julia died on April 8, 1816, and was canonized in 1970 by Pope Paul VI.

PRAYER: Lord, our God, grant that Your faithful spouse, St. Julia may kindle in us the flame of Divine love that she enkindled in other virgins for the everlasting glory of Your Church. Amen.
Saint of the Day
3. St. Thomas, Apostle
We Remember
July
Merciful Jesus, grant them eternal rest.