15. Assumption of the Blessed Virgin

Assumption of the Blessed Virgin 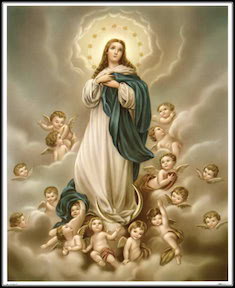 On November 1, 1950, Pope Pius XII defined as a truth revealed by God that the Immaculate Mother of God, Mary ever Virgin, when the course of her life on earth was finished, was taken up body and souls into heaven. Such is the Dogma of the Assumption of the Blessed Virgin.

“It is surely fitting, it was becoming, that she should be taken up into heaven and not lie in the grave till Christ’s second coming, [one] who had passed a life of sanctity and of miracles such as hers. … Who can conceive that God should so repay the debt, which He considered to owe to His Mother for the elements of His human Body, as to allow the flesh and blood from which it was taken to molder in the grave? Or who can conceive that that virginal frame which never sinned was to undergo the death of a sinner? …”

“She died, then, because even our Lord and Savior died. But though she died as well as others, she died not as others die; for, through the merits of her Son, by Whom she was what she was, by the grace of Christ which in her had anticipated sin, which had filled her with light, which had purified her flesh from all defilement, she had been saved from decease and malady, and all that weakens and decays the bodily frame” (Cardinal Newman).

Jesus and Mary both passed through the gate of death into heaven. In her own way, Mary was crucified with Jesus. She patiently stayed on earth, after His Ascension, so long as God willed.

From he place in heaven she still abides invisibly with us, ever our refuge, our comfort, our hope. Through the Communion of Saints, of which she is the Queen, we share in the joy and glory of her Assumption, to which the Entrance Antiphon of the Mass of August 15 gives us the key. “Let us rejoice in the Lord and celebrate this feast in honor of the Virgin Mary, at whose Assumption the angels rejoice, giving praise to the Son of God.”

PRAYER: Almighty, ever-living God, You raised to eternal glory the body and soul of the Immaculate Virgin Mary, Mother of Your Son. Grant that our minds may always be directed heavenward and that we may deserve to share in her glory. Amen.