22. The Queenship of the Blessed Virgin Mary

The Queenship of the Blessed Virgin Mary 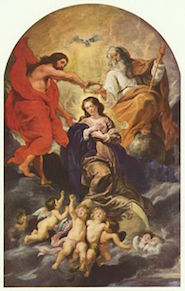 On October 11, 1954, His Holiness, Pope Pius XII, in his encyclical letter, “Ad Ceali Reginam”, decreed and instituted the feast of the Queenship of the Blessed Virgin Mary to be celebrated throughout the world every year. He declared that the Church has believed in Mary’s Queenship from the earliest centuries and that this belief rests on Holy Scripture and Tradition.

Mary is Queen of all “since she brought forth a Son, Who at the very moment that He was conceived, was, by reason of the hypostatic union of the human nature with the Word, even as Man, King and Lord of all things”. Further, “as Christ is our Lord and King by a special title because He redeemed us, so the Blessed Virgin [is our Lady and Queen] because of the unique way in which she has cooperated toward our redemption by giving of her own substance, by offering Him willingly for us, and by desiring, praying for, and bringing about our salvation in a singular manner”.

PRAYER: God, You have given us the Mother of Your Son to be Mother and Queen. Through her intercession, grant that we may attain the glory destined for Your adopted children in Your heavenly Kingdom. Amen.
Saint of the Day
St. Marcellus I, Pope
We Remember
January
Merciful Jesus, grant them eternal rest.
Mass Schedule:
7:30 AMMonday:
7:30 AMTuesday:
7:30 AMWednesday:
7:30 AMThursday:
7:30 AMFriday:
8:00 AMSaturday:
8:00 AMSunday:
8:00 AMHolidays:
Holy Hour - Adoration:
Thursday before First Friday: 7:00 - 8:00 PM