29. Martyrdom of St. John the Baptist

Martyrdom of St. John the Baptist 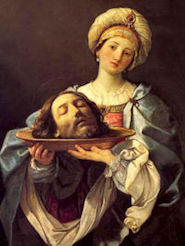 St. John, faithful to the inspiration of Divine grace, spent most of his life in the wilderness, and became the model of the many anchorites who later served God in the same manner. When thirty years old, he appeared before the world on the banks of the Jordan, as a preacher of penance, the precursor of Jesus Christ and “the voice of one crying in the wilderness.” He had the honor of baptizing his Divine Master and pointing Him out as the Lamb of God.

The occasion for the Saint’s martyrdom soon presented itself. Herod Antipas, son of Herod the Great, the slayer of the Innocents, was then ruler, or tetrarch, of Galilee. He is the same one whom our Lord called a “fox”, and by whom the Savior was sent to Pilate. On a visit to Rome he had made the acquaintance of Herodias, the wife of his brother Philip, and he took her as his wife. His own spouse, the daughter of Aretas, an Arabian King, fled to her father, and a war in which the army of Herod was defeated resulted.

St. John boldly denounced this adulterous and incestuous marriage, and as result was thrown into prison. But Herodias wanted greater revenge: nothing but the head of her enemy, John the Baptist, could satisfy her.

On the occasion of the anniversary of Herod’s birth, a feast was given in which Salome, the daughter of Herodias, pleased him exceedingly by a graceful dance. He swore that he would grant whatever she asked. The girl consulted her mother, who advised her to request the head of St. John. Herod was grieved by this request, for he esteemed the Baptist; yet he had the weakness to yield and to abide by his impious oath.

An officer was dispatched to the prison, and St. John was beheaded to satisfy the revenge of a voluptuous woman. The death of St. John occurred about a year before of our Lord.

PRAYER: God, You chose St. John the Baptist to be the forerunner of Your Son Who was born and died for us. Grant that, as St. John was martyred for truth and justice, so we may energetically profess our faith in You. Amen.
Saint of the Day
St. Anthony, Founder of Monasticism
We Remember
January
Merciful Jesus, grant them eternal rest.
Mass Schedule:
7:30 AMMonday:
7:30 AMTuesday:
7:30 AMWednesday:
7:30 AMThursday:
7:30 AMFriday:
8:00 AMSaturday:
8:00 AMSunday:
8:00 AMHolidays:
Holy Hour - Adoration:
Thursday before First Friday: 7:00 - 8:00 PM