5. Dedication of Our Lady of the Snows

Dedication of Our Lady of the Snows 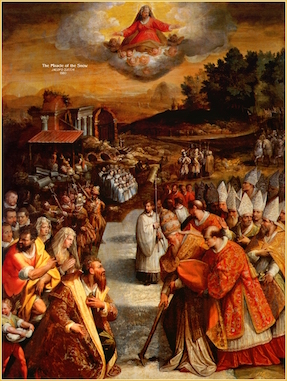 There is an ancient and popular tradition in Rome, according to which, during the reign of Pope Liberius in the 4th century, the Blessed Virgin appeared to a patrician named John, declaring that she wished a church to be dedicated to her honor on the spot that she indicated by a miraculous fall of snow in summer. John founded and endowed the church in 352, during the reign of the same Pope Liberius (352-366). Hence, it came to be called the Liberian Basilica.

Sixtus III enlarged and consecrated it under the title of the Virgin Mary about the year 435. The principal facade was added in 1741 by Benedict XIV. It bears the title of St.Mary Major, or the Greater, because it is in dignity, if not in antiquity, the first church in Rome among those dedicated to the Blessed Virgin. From the fact that the holy crib of Bethlehem is preserved in this church, it also bears the title of Sancta Maria ad Praesepe (at the Crib). St. Mary Major is one of the three patriarchal churches in which the Pope officiates on certain occasions, and in which there is an altar reserved only for him, St. Peter's and St. John Lateran being the others.

PRAYER: Forgive the sins of your people. May we who cannot please You by our unaided efforts attain salvation through the intercession of the Mother of Your Son. Amen.
Saint of the Day
Assumption of the Blessed Virgin
We Remember
August
Merciful Jesus, grant them eternal rest.
Mass Schedule:
7:30 AMMonday:
7:30 AMTuesday:
7:30 AMWednesday:
7:30 AMThursday:
7:30 AMFriday:
8:00 AMSaturday:
8:00 AMSunday:
8:00 AMHolidays:
Holy Hour - Adoration:
Thursday before First Friday: 7:00 - 8:00 PM