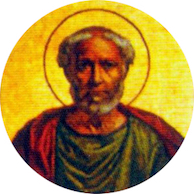 The father of St. Damasus, either after his wife’s death, or with her consent, had entered the priesthood and served the parish church of St. Lawrence in Rome. His son, St. Damasus, also entered the sacred ministry, being attached to the same church.

Under Pope Liberius held that Saint obtain a great share in the government of the Church; and when Liberius died in 366, St. Damasus, then sixty years old, was elected Pope.

In 368, St. Damasus held a Council in Rome, another in the same city in 370, in which the errors of Apollinaris were condemned. St. Jerome, who was great admirer of St. Damasus, acted as his secretary during the last three years of the life of this holy Pontiff.

The Pope encouraged St. Jerome in his studies, and the latter calls him “an incomparable person, learned in the Scriptures, a virgin Doctor or the virgin Church, who loved chastity and heard its praises with pleasure.”

The church, named to the present day St. Lawrence in Damaso, was repaired by the Saint, who also made other improvement in Rome. He was a poet and a man of genius who wrote with elegance. Ancient writers commend especially his zeal for the purity of the Faith, the innocence of his manners, his Christian humility, his compassion for the poor, and his piety. St. Damasus sat in the Chair of St. Peter for eighteen years. He died in 384.

PRAYER: Lord, grant that we may always celebrate the merits of Your Martyrs in imitation of St. Damasus who loved and venerated them. Amen.