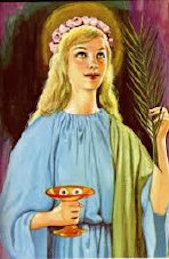 Patroness of the Blind and Writers

St. Lucy, a native of Syracuse in Sicily, was from her cradle educated in the Faith of Christ under the care of her widowed mother Eutychia. At an early age she secretly made a vow of virginity. She accompanied her long-suffering mother to the tomb of St. Agatha, and there her mother was cured of her disease. St. Lucy then disclosed to her mother the vow she had taken, and her mother, in gratitude for her recovery, left her free to follow her pious inclinations.

The young nobleman who had sought her in marriage was so enraged that he accused Lucy of being a Christian. She was imprisoned, but God gave her grace to overcome the tortures she was made endure. About the year 304/305, amidst the fierce war waged against the Christians under Diocletian, St. Lucy met her death by the sword.

PRAYER: Lord, may the intercession of Your Virgin and Martyr St. Lucy help us so that, as we celebrate her heavenly birthday on earth, we may contemplate her triumph in heaven. Amen.
Saint of the Day
St. Agnes, Virgin and Martyr
We Remember
January
Merciful Jesus, grant them eternal rest.
Mass Schedule:
7:30 AMMonday:
7:30 AMTuesday:
7:30 AMWednesday:
7:30 AMThursday:
7:30 AMFriday:
8:00 AMSaturday:
8:00 AMSunday:
8:00 AMHolidays:
Holy Hour - Adoration:
Thursday before First Friday: 7:00 - 8:00 PM