14. St. John of the Cross, Priest and Doctor of the Church

St. John of the Cross, Priest and Doctor of the Church 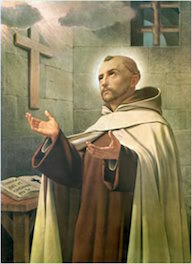 John Yepez was born at Fontiberos in Old Castile, Spain, in 1542. From his tenderest infancy he evinced a marked devotion toward the Blessed Virgin, of whose Order he became one of the brightest ornaments. After studying in a Jesuit college, he took the Carmelite habit, in the monastery of that Order at Medina del Campo in 1563, and practiced the greatest austerities. In 1567, he was ordained a priest.

Shortly after, John ,et St. Teresa of Avila at Medina del Campo, at which time she interested him in the work of reforming the Order. He entered heartily into her plans, and when the first monastery of Discalced Carmelite Friars was opened at Duruelo, John Yepez (who was to be St. John of the Cross) was its first member.

The saint successively filled the post of superior, prior, vicar-general, and definitor. In the midst of his exterior labors his heart was always intimately united to God; he is known in the Church as one of the great contemplatives and teachers of Mystical Theology.

In his las illness John had a choice between two monasteries; one of them was a pleasant residence and its prior was his intimate friend, but he chose the other, the one of Ubeda, which was poor and where prior was ill-disposed toward him. After much suffering, he died in 1591 and was canonized in 1726 by Pope Benedict XIII.

PRAYER: God, Your Priest St. John became a model of perfect self-denial and showed us how to love the Cross. May we always imitate him and be reworded with the eternal contemplation of Your glory. Amen.
Saint of the Day
St. Agnes, Virgin and Martyr
We Remember
January
Merciful Jesus, grant them eternal rest.
Mass Schedule:
7:30 AMMonday:
7:30 AMTuesday:
7:30 AMWednesday:
7:30 AMThursday:
7:30 AMFriday:
8:00 AMSaturday:
8:00 AMSunday:
8:00 AMHolidays:
Holy Hour - Adoration:
Thursday before First Friday: 7:00 - 8:00 PM