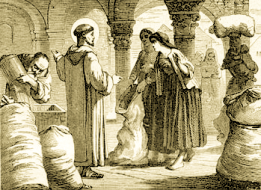 St. Maximin, a native of Verdun, was nephew of a priest named Euscipius, whom he followed to the court of King Clovis. Euspicius accompanying Clovis to Orleans, noticed a place well suited for retreat, called Micy. Having obtained the King’s permission to retire to it, he took up his abode in that solitude with St. Maximin and other disciples and built a monastery there.

At the end of two years Euscipius expired, and Eusebius, Bishop of Orleans, appointed St. Maximin to succeed him as Abbot of the monastery. The regularity of discipline that he established were such that many disciples flocked to him from all parts. Several of them are numbered among the Saints.

In a great famine, St. Maximin fed the entire city of Orleans with the grain in his monastery, which appeared to be miraculously multiplied. After governing his monastery ten years, he died about the year 520.

PRAYER: Lord, amid the things of this world, let us be wholeheartedly committed to heavenly things in imitation of the example of evangelical perfection You have given us in St. Maximin the Abbot. Amen.
Saint of the Day
St. Agnes, Virgin and Martyr
We Remember
January
Merciful Jesus, grant them eternal rest.
Mass Schedule:
7:30 AMMonday:
7:30 AMTuesday:
7:30 AMWednesday:
7:30 AMThursday:
7:30 AMFriday:
8:00 AMSaturday:
8:00 AMSunday:
8:00 AMHolidays:
Holy Hour - Adoration:
Thursday before First Friday: 7:00 - 8:00 PM