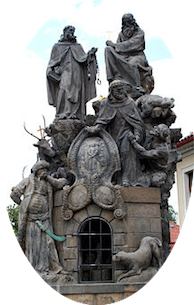 John was born at Faucon, in the year 1160. After theological studies at Paris, he earned hi Doctorate and was ordained a priest. During his first Mass he resolved, through an inspiration, to rescue Christian slaves from the Moslems.

Before starting such a venture, John wanted to spend time in prayer, and he thus joined the hermit Felix of Valois. John told Felix of his plan to rescue Christian slaves, and Felix offered to join him. Around 1197, they went to Rome to seek papal approval. Innocent III approved their plans to found the Order of the Most Holy Trinity and declared John the first superior general.

In the year 1201, one hundred and eighty-six slaves were redeemed in Marocco. The following year, John went to Tunis where one hundred and ten more slaves were redeemed. On one occasion the Moslems damaged John’s ship so badly that it seemed all on board would perish, but John used monk’s habit to form sails and all landed safely. John eventually died at Rome in 1213, and his cult was approved in 1655.