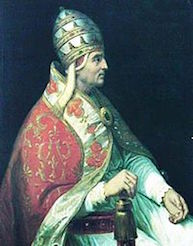 Urban V is regarded as the best of the so-called Avignon Popes who ruled the Church for some one hundred and seventy years from Avignon in the 13th and 14th centuries. Born in Grisac, France, in 1310, William of Grimoard became a noted Benedictine canonist and served as papal legate to Milan and Naples before being elected Pope in 1362.

The most important event of his reign was his abortive attempt to return the papacy to Rome, which occurred in 1367. He restored the papal buildings and reconciled the Eastern Emperor John V Palaeologus to the Church. He also concluded an alliance with Emperor Charles IV, founded the Universities of Krakow and Vienna, and aided the universities of Avignon, Toulouse, Orange, and Orleans.

However, political conflicts obliged the Pope to return to Avignon in 1370. In June of that year he informed the Romans that he was leaving them for the good of the Church, and on September 5 he sailed for France with a heavy heart. On December 19, he was dead, called by a contemporary “a light of the world and a way of truth; a lover of righteousness, fleeing from wickedness and fearing God.” His cult was approved in 1870 by Pope Pius IX.

PRAYER: Almighty and eternal God, You willed to set Blessed Urban over your entire people and to go before them in word and example. By his intercession keep the pastors of Your Church together with their flocks and guide that in the way of eternal salvation. Amen.
Saint of the Day
St. Francis de Sales, Bishop and Doctor of the Church
We Remember
January
Merciful Jesus, grant them eternal rest.
Mass Schedule:
7:30 AMMonday:
7:30 AMTuesday:
7:30 AMWednesday:
7:30 AMThursday:
7:30 AMFriday:
8:00 AMSaturday:
8:00 AMSunday:
8:00 AMHolidays:
Holy Hour - Adoration:
Thursday before First Friday: 7:00 - 8:00 PM