21. St. Peter Canisius, Priest and Doctor of the Church

St. Peter Canisius, Priest and Doctor of the Church 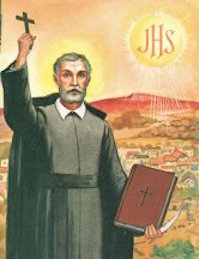 This eminent Jesuit was born in Nijmegen, Holland (when it was part of Germany), May 8, 1521. At twenty-two years of age he joined the Society of Jesus and distinguished himself in studies and spiritual perfection. He was the second great Apostole of Germany, preacher, theologian, and leader of the Counter Reformation.

With astonishing clarity this devout man of God saw that in order to combat the Reformation the Church must first reform herself in her pastors and prepare generation of instructed laymen capable of defending their Faith. Of the many works that flowed from his pen, the most celebrated remains a Catechism that appeared editions before the turn of the century.

PRAYER: God, You endowed Your Priest, St. Peter Canisius, with holiness and learning for the defense of the Church. Through his intercession, grant that those who seek the truth may joyfully find You and that the people of believers may ever persevere in bearing witness to You. Amen.
Saint of the Day
St. Agnes, Virgin and Martyr
We Remember
January
Merciful Jesus, grant them eternal rest.
Mass Schedule:
7:30 AMMonday:
7:30 AMTuesday:
7:30 AMWednesday:
7:30 AMThursday:
7:30 AMFriday:
8:00 AMSaturday:
8:00 AMSunday:
8:00 AMHolidays:
Holy Hour - Adoration:
Thursday before First Friday: 7:00 - 8:00 PM