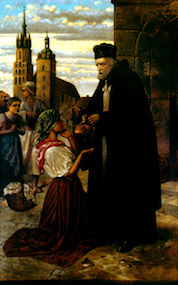 St. John was born in 1403 in a village, the name of which he bears, situated in the diocese of Krakow, Poland. His childhood was passed in innocence under the care of his virtuous parents. After finishing his studies he became professor in the University of Krakow, a position he occupied several years, endeavoring not only to train his pupils in science but also to instill into their hearts the sentiments of piety with which he was himself animated.

Having been ordained to the priesthood, John distinguished himself by still greater zeal for the glory of God and his own perfection. The carelessness and indifference of so many Christians were for him a great source of affliction. As parish priest, he became a true pastor of souls, severe toward himself and indulgent to others, showing himself the father of his people and their friend when they were in need. After some years he resumed his duties of professor, practicing at the same time prayer, love for the poor, and all Christians virtues.

Consumed by the desire of suffering martyrdom, John made a pilgrimage to Jerusalem and preached “Jesus Crucified” to the Turks. Four times he made a journey to Rome on foot. His sleep was short and taken on the floor; his food barely sufficed to keep him alive. By means of fasting and severe discipline he preserved his purity intact. During the last thirty years of his life he abstained entirely from meat. Finally, after distributing to the poor all he had in his house, he died in 1473. He was canonized in 1767 by Pope Clement XIII.

PRAYER: Almighty God, help us to follow the example of Your Priest, St. John, in advancing in the science of the Saints. May we show compassion to all who are in need so that we ourselves may obtain Your mercy. Amen.
Saint of the Day
St. Agnes, Virgin and Martyr
We Remember
January
Merciful Jesus, grant them eternal rest.
Mass Schedule:
7:30 AMMonday:
7:30 AMTuesday:
7:30 AMWednesday:
7:30 AMThursday:
7:30 AMFriday:
8:00 AMSaturday:
8:00 AMSunday:
8:00 AMHolidays:
Holy Hour - Adoration:
Thursday before First Friday: 7:00 - 8:00 PM