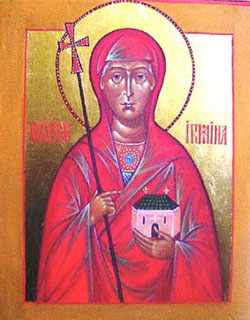 St. Irmina was a princess, the daughter of Dagobert II, King of the Franks. She was engaged to a certain Count Herman and ready to be married. However, a jealous suitor of the princess lured the count to his death. As a result, Irmina decided to enter the religious life in a convent that ha been built by her father, and she carried out her duties perfectly.

Among other things, Irmina rendered great assistance to St. Willibrord in his missionary labors. In 698, she donated to him the building that was turned into the renowned Monastery of Ecternach. After a life filled with prayers and good works, the Saint went to her eternal reward about 710.