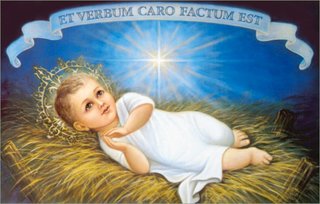 About twenty hundred years ago, a decree went forth from the Roman Emperor, Caesar Augustus, commanding a general census in which all the people of the empire should be enrolled, “each in his own city,” that is, in the place to which his tribe and family belonged.

Joseph and Mary went from Nazareth to Bethlehem, the city of David, because they were of the family of that king. Bethlehem is situated about five or six miles south of Nazareth. There, in a stable, Jesus Christ, the Son of God, the Redeemer of the world, was born, according to tradition, at midnight, or soon after, on December 25. And it came to pass that, when they were there, Mary “brought forth her first-born Son, and wrapped Him up in swaddling clothes, and laid Him in a manger, because there was no room for them in the inn” (Lk 2:7).

The history of the first Christmas is made familiar to Catholics by the devotion of the “Christmas Crib.” In the year 1226, St. Francis of Assisi, with the permission of the Pope, set up the first of these cribs for the purpose of instructing the people and increasing in their hearts love and devotion for the Infant Savior.

Christmas takes it name from the central and supreme act of Christian worship. Christmas means “Christ’s Mass,” the Mass offered in honor of the birth of Christ. Nearly all European languages, except English, use a word signifying nativity or birthday of Christ to designate the feast of Christmas.

In all lands and languages the great fact commemorated is the birth of Christ, and the great action by which that fact is commemorated and renewed is the Mass. On Christmas priests may celebrate three Masses to honor the threefold birth of the Son of God: His birth in time and in our humanity in the stable of Bethlehem; Hid spiritual birth by faith and charity in the souls of the shepherds, and in our souls, and in the souls who earnestly seek Him; and lastly, His eternal generation in the bosom of the Father.

PRAYER: God, in an admirable fashion You established the dignity of human nature and You reformed it in a more admirable manner. Grant that we may come to share in the Dignity of Your Son Who chose to share our humanity. Amen.
Saint of the Day
St. Vincent Pallotti, Priest
We Remember
January
Merciful Jesus, grant them eternal rest.
Mass Schedule:
7:30 AMMonday:
7:30 AMTuesday:
7:30 AMWednesday:
7:30 AMThursday:
7:30 AMFriday:
8:00 AMSaturday:
8:00 AMSunday:
8:00 AMHolidays:
Holy Hour - Adoration:
Thursday before First Friday: 7:00 - 8:00 PM