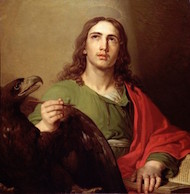 St. John, the son of Zebedee, and the brother of St. James the Great, was called be an Apostle by our Lord in the first year of His Public Ministry. He became the “beloved disciple” and the only one of the Twelve who did not forsake the Savior in the hour of His Passion. He stood faithfully at the Cross, whence the Savior made him the guardian of His Mother.

John’s later life was passed chiefly in Jerusalem and at Ephesus. He founded many Churches in Asia Minor. He wrote the fourth Gospel and three Epistles, and the Book of Revelation is also attributed to him. Tradition relates that, brought to Rome, he was by order of Emperor Domitian cast into a caldron of boiling oil but came forth unhurt and was banished to the island of Patmos for a year. He lived to an extreme old age, surviving all his fellow Apostles, and died at Ephesus about the year 100.

St. John is called the Apostle of Charity, a virtue that learned from his Divine Master and constantly inculcated by word and example. The “beloved disciple” died at Ephesus, where a stately church was erected over his tomb. It was afterward converted into a mosque.

PRAYER: God, through St. John the Apostle You willed to unlock to us the secrets of Your Word. Grant that what he has so excellently poured into our ears, we may properly understand. Amen.
Saint of the Day
St. Agnes, Virgin and Martyr
We Remember
January
Merciful Jesus, grant them eternal rest.
Mass Schedule:
7:30 AMMonday:
7:30 AMTuesday:
7:30 AMWednesday:
7:30 AMThursday:
7:30 AMFriday:
8:00 AMSaturday:
8:00 AMSunday:
8:00 AMHolidays:
Holy Hour - Adoration:
Thursday before First Friday: 7:00 - 8:00 PM