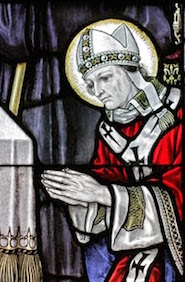 St. Thomas was born in London in 1117, eight years after the death of St. Anselm, whose successor he was destined to became. He embraced the ecclesiastical state and attached himself to Theobald, Archbishop of Canterbury, by whose leave he went to Italy to study Canon Law at Bologna. On his return home he was ordained deacon and made archdeacon of Canterbury. In 1154, at the recommendation of Theobald, Henry II appointed him Lord Chancellor of England, a post that he filled with distinction.

On the death of Theobald, in 1160, the King forced upon the Saint the dignity of archbishop of Canterbury; but when Thomas refused to tolerate the existence of certain abuses, the King felt himself offended and finally matters came to an open rupture between Archbishop and King. After much persecution, to which he was subject, Thomas secretly left the kingdom and went to Pope Alexander III who was then in France and who received him kindly.

Later Thomas was able to return to England, but he went with the presentiment that he was going to his death. He was received with the greatest demonstrations of joy by his people, but the end was near. Henry, in a fit of passion, let slip some unguarded words that, however they may have been intended, were constructed so as to place weapons in the hands of the Saint’s assassins. The result was that St. Thomas was murdered in his church, at the foot of the altar, in 1170. Within three years after his death, he was canonized as a Martyr by Pope Alexander III.

PRAYER: God, You enabled St. Thomas, Your Martyr, to sacrifice his life courageously in the cause of justice. Through his intercession, help us to give up our lives for Christ in this world so that we might find eternal life in Heaven. Amen.
Saint of the Day
St. Anselm, Bishop and Doctor of the Church St. Apollonius, Martyr
We Remember
April
Merciful Jesus, grant them eternal rest.
Mass Schedule:
7:30 AMMonday:
7:30 AMTuesday:
7:30 AMWednesday:
7:30 AMThursday:
7:30 AMFriday:
8:00 AMSaturday:
8:00 AMSunday:
8:00 AMHolidays:
Holy Hour - Adoration:
Thursday before First Friday: 7:00 - 8:00 PM