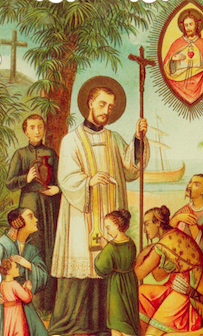 The Apostle of the Indies was born at the castle of Xavier in Navarre, Spain, in 1506. He was of noble descent. At the age of eighteen he went to Paris to study Philosophy. About four years later, St. Ignatius Loyola came to the same city and took up his abode in the College of St. Barbara, to which St. Francis belonged. At that tome St. Francis was full of the world ambition, but the company of St. Ignatius exercised such a beneficent influence upon him that he grew to be a changed man and became one of the first disciples of the Saint.

In 1536, Francis went to Venice with the first companions of St. Ignatius. After visiting Rome he was ordained a priest at Venice in 1537, and the first Jesuits made their vows before the Pope’s nuncio. Shortly after the Society had been established, St. Francis was sent to Portugal. In 1541, he set sail for India, which was to be the field of his labor for the rest of his life, and landed at Goa the following year. From that city, which completely reformed, his apostolic labors extended to the coast of Malabar, to Travancor, Malacca, the Moluccas, and Ceylon, and in all these places he converted large numbers to Christianity.

In 1549, Francis carried the light of Faith to Japan, of which he became the first missionary, and where a flourishing Christian community soon arose. He remained in Japan two years and four months, and returned to India in 1551.

The Saint then returned his eyes to China. After visiting Goa, he set sail, in 1552, to carry out his resolve, but God was satisfied with his will. On the twenty-third day after his departure from Malacca he arrived at Sancian. On November 20, a fever seized him, and, alone upon a foreign shore, he died on Friday, December 3, 1552, at the age of forty-six. He was canonized in 1622 by Pope Gregory XV.

PRAYER: Lord, You won many peoples for Your Church through the preaching of St. Francis. Inspire the faithful today with the same zeal for spreading the Faith, so that everywhere the Church may rejoice in her many children. Amen.
Saint of the Day
St. Agnes, Virgin and Martyr
We Remember
January
Merciful Jesus, grant them eternal rest.
Mass Schedule:
7:30 AMMonday:
7:30 AMTuesday:
7:30 AMWednesday:
7:30 AMThursday:
7:30 AMFriday:
8:00 AMSaturday:
8:00 AMSunday:
8:00 AMHolidays:
Holy Hour - Adoration:
Thursday before First Friday: 7:00 - 8:00 PM