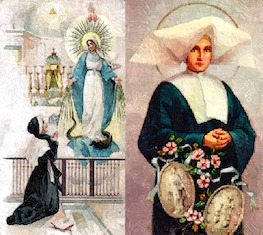 On July 1á, the first apparition occurred in the community’s motherhouse. St. Catherine beheld a Lady seated on the left side of the sanctuary. When St. Catherine approached her, the heavenly visitor told her how to act in time of trial and pointed to the altar as the source of all consolation. Promising to entrust St. Catherine with a mission that would cause her great suffering, the Lady also predicted the anticlerical revolt that occurred at Paris in 1870.

On November 27, the Lady showed St. Catherine the medal of the Immaculate Conception, now universally known as “The Miraculous Medal.” She commissioned St. Catherine to have one made, and to spread devotion to this medal.

At that time, only the Saint’s spiritual director, Father Aladel, St. Catherine spoke fully of the apparitions to one of her superiors. She died on December 31, 1876, and was canonized on July 27, 1947, by Pope Pius XII.

PRAYER: O Lord Jesus Christ, You were pleased to gladden the holy Virgin Catherine by the wonderful apparition of your Immaculate Mother. Grant that we may follow the example of the same Saint in honoring Your most holy Mother with filial devotion and obtain the joy of eternal life. Amen.
Saint of the Day
St. Vincent Pallotti, Priest
We Remember
January
Merciful Jesus, grant them eternal rest.
Mass Schedule:
7:30 AMMonday:
7:30 AMTuesday:
7:30 AMWednesday:
7:30 AMThursday:
7:30 AMFriday:
8:00 AMSaturday:
8:00 AMSunday:
8:00 AMHolidays:
Holy Hour - Adoration:
Thursday before First Friday: 7:00 - 8:00 PM