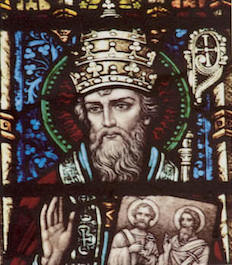 St. Sylvester, born in Rome, was ordained by Pope St. Marcellinus during the peace that preceded the persecutions of Diocletian. He passed through those days of terror, witnessed the abdication of Diocletian and Maximian, and saw the triumph of Constantine in 312.

Two years later Sylvester succeeded St. Melchideas as Bishop of Rome. In the same year he sent four legates to represent him at the great Council of the Western Church, held at Arles. He confirmed its decisions and imparted them to the Church.

The Council of Nicaea was assembled during Sylvester’s reign, in 325, but not being able to assist at it in person, on account of his great age, he sent his legates, who headed the list of subscribers to its decrees, preceding the Patriarchs of Alexandria and Antioch. St. Sylvester occupied the chair of St. Peter for twenty-four years and eleven months. He died in 335.

PRAYER: Lord, come to the aid of Your people who are supported by the intercession of St. Sylvester Your Pope. May they pass the present life under Your guidance so that they may have the happiness of attaining life in heaven. Amen.
Saint of the Day
St. Agnes, Virgin and Martyr
We Remember
January
Merciful Jesus, grant them eternal rest.
Mass Schedule:
7:30 AMMonday:
7:30 AMTuesday:
7:30 AMWednesday:
7:30 AMThursday:
7:30 AMFriday:
8:00 AMSaturday:
8:00 AMSunday:
8:00 AMHolidays:
Holy Hour - Adoration:
Thursday before First Friday: 7:00 - 8:00 PM