7. St. Ambrose, Bishop and Doctor of the Church

St. Ambrose, Bishop and Doctor of the Church 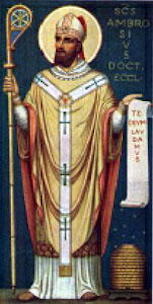 St. Ambrose was born in Gaul, where his father exercised the office of Prefect of the Praetorium, about the year 340. His father died while he was still an infant, and with his mother he returned to Rome, where he enjoyed a good education, learned the Greek language, and a good poet and orator. Later he moved to Milan with his brother.

Probus, Praetorian Prefect of Italy, appointed Ambrose Governor of Liguria and Aemilia. His virtues in this office, and the voice of a child who proclaimed him Bishop, marked him out to the people of Milan as their Bishop on the vacancy of the See. Both Catholics and Arians elected him to the first dignity in the diocese, a dignity that he reluctantly accepted. As he was only a catechumen, he received the Sacrament of Baptism, after which he was consecrated Bishop, in 374, at the age of thirty-four.

After giving his fortune to the Church and the poor, Ambrose applied himself to study the Scriptures and ecclesiastical writes, placing himself under the instruction of Simplicianus, a priest of the Church of Rome, who succeeded him in the Archbishopric of Milan. His warfare against the Arians was such that by the year 385 very few still professed that heresy in the diocese. In 381, he had a Council at Milan against the heresy of Apolinaris, and assisted at that of Aquileia; the next year, he assisted at one held in Rome.

When Maximus assumed the purple in Gaul, St. Ambrose was sent there, and he succeeded in concluding a treaty with the Emperor. But a second embassy, in 387, was not so successful: Maximus invaded Italy and was defeated by the Emperor Theodosius. St. Ambrose at a later date had occasion to reprehend Theodosius and did so with the greatest Apostolical freedom.

St. Ambrose had the joy of witnessing the conversion of the great St. Augustine, whom he baptized in 387. One of his last actions was the ordination of St. Honoratus. After a life of labor and prayer the holy Bishop of Milan died in 397.