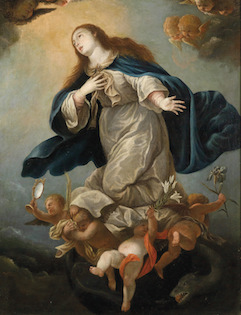 Patroness of the United States

Mary the Mother of God is venerated on December 8 as the Immaculate Conception. This feast commemorates the preservation of the Blessed Virgin from the stain of original sin from the first moment of the conception. It originated in the Eastern Church about the 8th century.

The doctrine of the Immaculate Conception was defined by Pope Pius IX on December 8, 1854. This Dogma, in accord with the text of Scripture—“I will put enmity between you and the woman, between your seed and her seed” (Gn 3:15); “Hail full of grace” (Lk 1:28)—was clearly understood and accepted by Tradition, by the writings of the Fathers, and by feast observed according to the general belief of the faithful long before it was officially defined by Pope Pius IX.

PRAYER: God, through the Immaculate Conception of the Virgin, You prepared a worthy place for Your Son. In view of the foreseen Death of Your Son, You preserved her from all sin. Through her intercession grant that we may also reach You with clean hearts. Amen.
Saint of the Day
St. Thomas Aquinas, Priest and Doctor of the Church
We Remember
January
Merciful Jesus, grant them eternal rest.
Mass Schedule:
7:30 AMMonday:
7:30 AMTuesday:
7:30 AMWednesday:
7:30 AMThursday:
7:30 AMFriday:
8:00 AMSaturday:
8:00 AMSunday:
8:00 AMHolidays:
Holy Hour - Adoration:
Thursday before First Friday: 7:00 - 8:00 PM