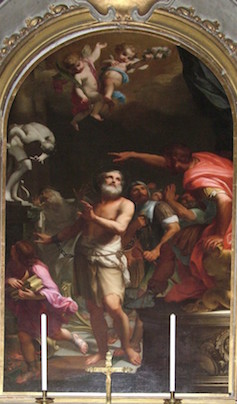 About the year 304, during the persecution of Diocletian, a priest from Abitina in Africa and forty-eight other Christian men, women and children from the same city were arrested during Sunday assemble for refusing to hand over the Sacred Scriptures. They included the four children of Saturninus, of whom the two elder were lectors, Mary was a virgin consecrated to God, and Hilary was a young boy.

These dedicated Christians were sent to Carthage for trial and brought before the proconsul Anulinus. After some of them were tortured, all appeared before Anulinus, February 11, 304, and strongly defended their Faith before being sent back to prison. We do not know for certain whether these faithful followers of Christ were executed on the next day or whether the proconsul let them die of hunger.