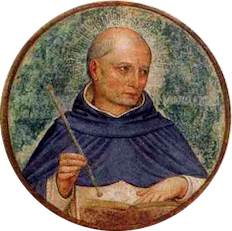 Jordan was a Saxon named Gordanus, or Giordanus, who had received a Bachelor of Divinity in Paris by 1219, when he met St. Dominic. The next year he joined the Dominican Order and became Prior Provincial of Lombardy. When Dominic died, Jordan was elected the second Master General of the Order.

Jordan extended the Order to Germany, Switzerland, and Denmark. By his powerful preaching, he also brought in new recruits—e.g., St. Albert the Great. In addition, he wrote a life of St. Dominic that is very valuable source of information about the Saint.

Jordan is particularly remembered for his ability to turn a phrase. For example, when he was asked what was the best way to pray, he replied: “The way in which you can pray most fervently.”

In 1237, Jordan undertook a voyage to the Holy Land with two of the Brothers. Their ship was wrecked by a storm off the coast of Syria, and all on board perished. His cult was approved in 1825 by Pope Leo XII.

PRAYER: O God, You endowed Blessed Jordan with wonderful zeal to save souls and power to propagate religious life. Through his merits and prayers, enable us to live always in this same spirit and so attain the glory reserved for us in heaven. Amen.
Saint of the Day
St. Maximinus of Trier, Bishop
We Remember
May
Merciful Jesus, grant them eternal rest.
Mass Schedule:
7:30 AMMonday:
7:30 AMTuesday:
7:30 AMWednesday:
7:30 AMThursday:
7:30 AMFriday:
8:00 AMSaturday:
8:00 AMSunday:
8:00 AMHolidays:
Holy Hour - Adoration:
Thursday before First Friday: 7:00 - 8:00 PM