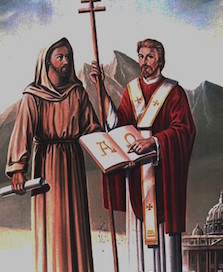 The two brothers, Sts. Cyril (originally Constantine) and Methodius, Apostles of the Slavs, were born in a noble family in Thessalonika, a district in northeastern Greece. Constantine was the younger, born in about 827, and his brother Methodius in about 815. They both entered the priesthood. Constantine undertook a mission to the Arabs, and then became a professor of philosophy at the imperial school in Constantinople and librarian at the cathedral of Santa Sophia. Methodius became governor of a district that had been settled by Slavs. Both brothers then retired to monastic life. In about 861, the Emperor Michel III sent them to work with the Khazars northeast of the Black Sea in the Dnieper-Volga region of what was later Russia. They learned the Khazar language and made many converts, and discovered what were believed to be relics of Clement, an early Bishop of Rome.

In about 863, Prince Rastislav, the ruler of Great Moravia (an area including much of what was later Czechoslovakia), asked the emperor for missionaries, specifying that he wanted someone who would teach his people in their own language. The emperor and the Patriarch Photius sent Methodius and his brother Constantine, who translated the Liturgy and much of the Scriptures into Slavonic.

When the saintly brothers came to Rome to render an account of their mission, Pope Hadrian II authorized to use the Slavonic Liturgy. Constantine entered a monastery there, taking the name Cyril. However, he died only a few weeks thereafter, on February 14, 869, leaving St. Methodius to continue the apostolate alone. St. Methodius was consecrated Bishop by Pope Hadrian II and sent him back. He did the apostolate with success in Moravia, Slovakia, Bohemia and the neighboring countries. He died on April 6, 885 in Velehrad, the old capitol of Moravia, worn out by his heroic labors and long struggles with enemies that never ceased to antagonized him.

PRAYER: Merciful God, You have enlightened the Slavonic nations by the teaching of the brothers Cyril and Methodius. Help us to assimilate the teachings of Your doctrine and perfect us as a people united in the true Faith and its expansion. Amen.
Saint of the Day
St. Maximinus of Trier, Bishop
We Remember
May
Merciful Jesus, grant them eternal rest.
Mass Schedule:
7:30 AMMonday:
7:30 AMTuesday:
7:30 AMWednesday:
7:30 AMThursday:
7:30 AMFriday:
8:00 AMSaturday:
8:00 AMSunday:
8:00 AMHolidays:
Holy Hour - Adoration:
Thursday before First Friday: 7:00 - 8:00 PM