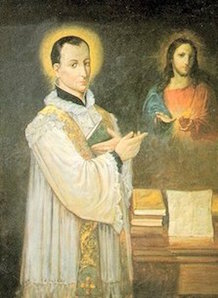 Born in 1641, St. Claude entered the Society of Jesus in Lyons, France, and gained widespread fame as an orator and educator in Paris. He had great devotion to the Sacred Heart of Jesus and, on a visit to the Visitation convent in Paray-le-Monial, met St. Margaret Mary Alacoque and learned of the vision she had been privileged to receive. He spent eighteen months at Paray-le-Monial acting as her spiritual director and encouraging her to spread the devotion as she had been commanded by our Lord.

Father Claude himself became a zealous apostle of the devotion to the Sacred Heart, regarding it as the means of revitalizing the Faith among the people. He continued to promote the devotion when he was sent to London to preach to the Duchess of York, and succeeded in converting the Duke of York as well as other Protestants. Because of the intense hostility against Catholics at the time, his efforts earned a death sentence.

Father Claude received a commutation of his death sentence and returned to France in ill health. He died at Paray-le-Monial in 1682. He was beatified in 1929 by Pope Pius XI and canonized on May 31, 1992, by Pope John Paul II.

PRAYER: Lord, our God, You spoke to St. Claude in the depths of his heart that he might bear witness to Your boundless love. May his gifts of grace illumine and comfort Your Church. Amen.
Saint of the Day
St. Maximinus of Trier, Bishop
We Remember
May
Merciful Jesus, grant them eternal rest.
Mass Schedule:
7:30 AMMonday:
7:30 AMTuesday:
7:30 AMWednesday:
7:30 AMThursday:
7:30 AMFriday:
8:00 AMSaturday:
8:00 AMSunday:
8:00 AMHolidays:
Holy Hour - Adoration:
Thursday before First Friday: 7:00 - 8:00 PM