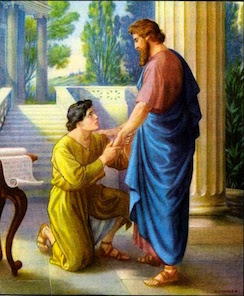 St. Onesimus was a native of Phrygia. He stole from his master and fled to Rome, where he met St. Paul who was then a prisoner. The Apostle converted him to Christianity, baptized him, and sent him back to Colossae with a letter to Philemon, his former master, beseeching his pardon. This letter written by the hand of St. Paul himself had the desired effect. St. Onesimus obtained pardon of Philemon and returned to St. Paul, whom he afterward faithfully served.

He was later sent to Colossae with Tychicus as the bearer of the Epistle to the Colossians.

PRAYER: Almighty, ever-living God, You enabled St. Onesimus to flight to the death for justice. Through his intercession enable us to bear all adversity and with all our strength hasten to You Who alone are life. Amen.
Saint of the Day
St. Maximinus of Trier, Bishop
We Remember
May
Merciful Jesus, grant them eternal rest.
Mass Schedule:
7:30 AMMonday:
7:30 AMTuesday:
7:30 AMWednesday:
7:30 AMThursday:
7:30 AMFriday:
8:00 AMSaturday:
8:00 AMSunday:
8:00 AMHolidays:
Holy Hour - Adoration:
Thursday before First Friday: 7:00 - 8:00 PM