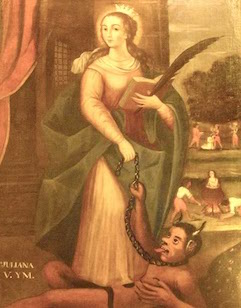 Juliana was born in the 3rd century. During the persecution under Emperor Maximian, according to the Roman Martyrology, she was scourged by her father Africanus because of her strong attachment to Christianity. Later, when she refused to marry the prefect Evilasius, she was tortured by her father and then thrown into prison.

Legend has it that while in prison Juliana wrestled with the devil who appeared in the form of an Angel. Despite terrible physical assaults on her body, Juliana refused to give up her Faith. Seemingly evil spirits could not move her.

Eventually the Saint was condemned to death. Although thrown into a fiery furnace and later into a cauldron of boil oil, she remained unharmed. As a result, she was beheaded.

Where all of this occurred is open to question. The general belief is took place at Cumae, near Naples, where Juliana’s relics are reputed to be. The Roman Martyrology states that she was martyred at Nicomedia and that her relics were later transferred to Cumae.

PRAYER: All-powerful and ever-living God, You choose the weak in this world to confound the powerful. As we celebrate the anniversary of the martyrdom of St. Juliana, may we like her remain constant in Faith. Amen.
Saint of the Day
St. Maximinus of Trier, Bishop
We Remember
May
Merciful Jesus, grant them eternal rest.
Mass Schedule:
7:30 AMMonday:
7:30 AMTuesday:
7:30 AMWednesday:
7:30 AMThursday:
7:30 AMFriday:
8:00 AMSaturday:
8:00 AMSunday:
8:00 AMHolidays:
Holy Hour - Adoration:
Thursday before First Friday: 7:00 - 8:00 PM